The Most Beautiful Shots in Horror History

The Most Beautiful Shots in Horror History

Some of the best and most beautiful cinematic history moments did not come from some big budget Hollywood drama, but instead from the dark corners of low budget horrors.

There are many moments that struck a chord with audiences, thanks to their compelling story and tense atmosphere, but a huge part of the scenes set up falls on the films cinematographer, who captures the moment in the best lens, angle and light possible.

We have picked what we believe to be some of the most iconic and beautiful single shots captured from horror films. Shots that capture the artistic side of cinema and yet express the true terror of the genre. Here are The Most Beautiful Shots in Horror History.

Nosferatu (1922) - Nosferatu is a 1922 silent German Expressionist horror film directed by F. W. Murnau and was basically a knocked off version of Bram Stokers Dracula. Despite it being in the early era of cinema, it still manages to be an amazingly beautiful films, where the every scene has to speak for itself. Fritz Arno Wagner did an fantastic job of bringing the film to life, and is considered one of the most acclaimed German cinematographers from the 1920s to the 1950s. His set up for the shadow walk is still one of the most iconic shots in horror.

Psycho (1960) - Alfred Hitchcock’s psychological horror thriller, Psycho, was unlike anything previously seen in a mainstream film. It’s artistic merits were well credited when it hit the Oscars that year. John L. Russell won a nomination for Best Cinematography – Black-and-White. One of the most mesmerizing sequences came in the first half of the film, as Marion Crane takes a shower in her motel room. While in the shower, a shadowy figure appears behind the shower curtain. What happens next is part of cinema’s golden history. However, the perfectly framed shot of a strange figure looming above Marion is a stark and beautiful moment of tension before the real screaming begins.

A Clockwork Orange (1971) - Stanley Kubrick brought horror to the UK in 1971, when he adapted Anthony Burgess's dystopian crime novel. Shot in and around London, Kubrick brought in cinematographer John Alcott, who walked away from the project with a Bafta nomination. One of the most stunning set pieces comes at the start of film and was shot under York Road Roundabout at the southern end of Wandsworth Bridge in London. The attack on a tramp is shot in shadow, with a single backlight bringing the figures to life. It’s a stunning shot that highlights the brutality of Alex and his gang.

The Exorcist (1973) - Up until The Exorcist in a 1973, horror films have always been an affair for the fans. The Exorcist brought horror to the for front of cinema with an amazing cast, huge production values and an extremely competent cinematographer in Owen Roizman. His work on The Exorcist gave him a Oscar nomination for best cinematography. And it’s not hard to see why. The tense moment Father Merrin arrives out side the MacNeil house is a stark image forever imprinted on cinematic history.

Texas Chainsaw Massacre (1974) - Despite it’s rough around the edges quality, Texas Chainsaw Massacre managed to make a huge impact when it hit screens in 1974. It’s shocking nature and low budget aesthetics lent itself to the trend of horror films at it’s time. But surprisingly, it managed to capture one of the most beautiful shots in early horror history, as Leather face dances around in anger, with his chainsaw spinning, in the closing moment of the film. It’s dark yet somehow graceful in its rage filled intent. All backlit by the dying light of the day. The film’s cinematographer Daniel Pearl met Director Tobe Hooper in a film lab. After receiving some advice on filters, Hooper invited him to work on The Texas Chain Saw Massacre, saying that "it's really important that I have a Texan shoot this film”.

Suspiria (1977) - The 1977 horror Suspiria is filled with stylistic flourishes that have become familiar Dario Argento trademarks throughout his films. Cinematographer Luciano Tovoli emphasize vivid primary colors, particularly red, which created an otherworldly feel to the film. Near the end of the film, a sequence sees Suzy Bannion discover the dance schools directress sleeping on a curtained bed. The entire sequence is brightly lit with multiple neon colours that just highlight the true horror at play here. The sequence is is pure eye candy, with a dash of terror.

The Fog (1980) - John Carpenter’s The Fog is an amazingly creepy film from 1980. One of Hollywood’s most prolific cinematographers, Dean Cundey, joined the films crew to help raise the bar of this low budget horror. The film was shot in the anamorphic 2.35:1 format, in order to make it look like a much more cinematic and with the many shots of the fog rolling in, this format really helped to capture the scale of the incoming threat. One of the films most beautiful shots comes in the films third act, as the crew of the sunken Elizabeth Dane return to the church. It’s a haunting shot that captures the films premise perfectly.

The Beyond (1981) - Directed by Lucio Fulci, The Beyond follows a woman who inherits a hotel which turns out to be a be a gateway to hell. The film is filled with strange characters and plenty of gore. Sergio Salvati steps in as cinematographer and captures several pretty impressive scenes. But there is one that is the films major highlight. The mysterious blind Emily haunts the film throughout. In one sequence, she is seen standing alone on a bridge, with her dog. The set up is perfect and the result a stunning scene that’s intriguing and un-nerving. There's something so eerie and desolate about it!

A Nightmare on Elm Street (1984) - Wes Craven’s horror master piece gave us more than just good screens when it hit cinema in 1984, it also showed us that there was a place for amazing cinematography in slasher films, as Jacques Haitkin gave us one of the most chilling scenes in NOES history. As Nancy Thompson starts to fall asleep, we see Freddy Kruger stalking his prey, pushing through the bedroom wall. The camera setup, lighting and atmosphere create something spectacular. Even the Remake in 2010 failed to improve upon this scene, relying on awful CGI to recreate the scene.

The Descent (2005) - One of the things that makes Neil Marshall’s British horror The Descent so damn good is it’s impeccable cinematography, provide by Sam McCurdy. Despite the cramped sets and limited space, Sam jammed in plenty of moody lighting to give each and every scene plenty of creepy atmosphere. But the most impactful moments come in the closing moments of the UK ending, sadly cut from the US release. As Sarah awakens in the cave after her hallucination of her escape. She sits up to see her dead daughter Jessica sitting across from her holding a birthday cake. We get some amazing close up’s and a gentle pan to reveal Sarah, alone in the cave with the torch light dancing off her blood strained skin. Such a powerful moment that should send chills down your spine.

Let The Right One In (2008) - Let The Right One is filled with mazing set pieces, all which are complimented with the camera work of cinematography Hoyte Van Hoytema. But one of the most mesmerizing shots comes from an incredible sequence that blew the audience away. Whilst young Oskar is being bullied in the schools swimming pool, his new vampiric friend Eli, gets the drop on the young thugs. The shot begins under water, as we watch poor Oskar drowning, but a commotion above water sees body parts raining down into the cameras view. The scene then cuts to Oskar’s point of view as he is pulled out of the water, straight into the warm caring eyes of Eli. It’s stunning cinema.

The Definitive Guide To The Count’s Cinematic History 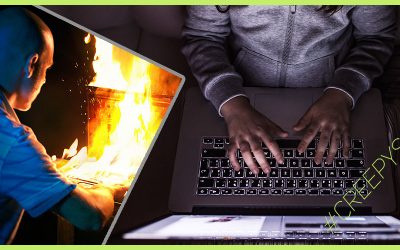 The 13 Creepiest Websites On The Internet You’ll Ever Visit!

Take a journey into the grey web of the weird, dark and strange!

The 13 Creepiest Websites On The Internet You’ll Ever Visit!

Take a journey into the grey web of the weird, dark and strange!

“Hello Horror Fans – I love looking at the more artistic side of films. These shots truly are stunning. We probably missed a huge chunk of other shots that deservers to be on this list, so why not tell us what we missed in the comments below. We may just do a part 2?