Director, producer and screenwriter Alfred Joseph Hitchcock was born in London on August 13th, 1899, and was raised by his strict, Catholic parents above a leased grocer’s shop in Leytonstone, on the outskirts of East London. Hitch worked for a short time in engineering in his youth, before venturing into the fledgling film industry which was rapidly growing. The son of a Covent Garden merchant, an interest in photography led to him working in London’s film industry, first as a title card designer for silent movies and, just five years later, as a director. His strict upbringing majorly influenced the filmmaker, and the idea of being harshly treated or wrongfully accused was something that heavily reflect in his work.

Hitchcock quickly gained notoriety as a director of dark, often violent, subject matters. Delivering clever and suspenseful thrillers, with meaningful characters and twist endings, Hitch stood out from the crowed in every way possible. He became just as well-known as any of the actors he worked with, thanks to his interviews, film trailers and cameo appearances. His public persona was built on the foundation of his sophisticated British deadpan humour. Married with his technical directorial skills and his constant film and TV presence, Hitchcock made himself a house hold name and a cultural icon.

It was his first ventures into hollywood filmmaking that lead him on his amazing career.

Any film fan worthy their salt will know the opening lines to Hitchcock’s springboard leap into Hollywood filmmaking. Such is its enduring legacy. “Last night I dreamt I went to Manderley again…”. The 1940 psychological thriller Rebecca was his first American project, and his first film under contract with producer David O. Selznick, whose seven-year contractual marriage would go down in infamy. Right from the start the two disagreed on “Rebecca”. To Selznick’s horror, voiced in a 3,000 word memo, Hitch’s treatment wildly diverged from the Daphne Du Maurier novel, of which the film was based. “We bought Rebecca and we intend to make Rebecca”, Selznick told a disgruntled Hitchcock.

The resulting film was a masterpiece of cinema that was beautiful, haunting and suspenseful. It showed Hitchcock’s masterful technical control over sound and camera, and even introduced many motifs that he would constantly fall back on, such as strong female characters and domineering mothers. The film was a huge success for Hitchcock, winning the Oscar for Best Picture, and making him a much sought-after director. Due to the conflict with Selznick, all those studios looking to cash in on Hitchcock fever, were about to get their opportunity.

“For me, suspense doesn’t have any value if it’s not balanced by humor”

As a result of the growing animosity between Hitch and Selznick, the young director found himself continually loaned out to other studios. This kept Hitch out of Selznick’s hair, but still generating funds for his studio, Selznick International Pictures. With a contact firmly in place, Hitchcock had little choice but to agree to the partnerships that Selznick set up, resulting in films such as Suspicion, Shadow of a Doubt and Lifeboat. But it was the troubled pairs next collaboration that really put Hitchcock on the

Spellbound was the result of Selznick’s visits to a New York shrink, and his discovery of psychoanalysis. When Hitch approached Selznick’s about buying the rights to Francis Beeding’s novel The House of Dr. Edwardes, Selznick saw an opportunity to create a film that would highlight the benefits of psychology. With the film quickly in production, the excited producer hired his very own doctor as a technical adviser, to which Hitchcock retaliated by hiring artist Salvador Dali to help design and shoot the surreal dream sequences. The “technical adviser” once tried to correct Hitch on one scene to which he replied, “My dear, it’s only a movie”. Selznick returned fire by cutting most of Dali’s sequences.

Spellbound has one of Hitchcock’s finest casts, with Gregory Peck and Ingrid Bergman in the lead roles, and legendary Russian actor Michael Chekhov and (Hitchcock favourite) Leo G. Carroll in support. Thanks to the films rich cast and surreal imagery, the film proved to be a huge hit and picked up six Oscar nominations. A comforting sign for the already award winning director.

“Give them pleasure – the same pleasure they have when they wake up from a nightmare.”

In 1946, Hitchcock’s next venture was a World War II spy thriller called Notorious which was a slight departure to his usual films. Hitchcock’s movies were often psychologically complex, and even funny at times, but they’re rarely romantic.  Notorious starred Cary Grant and Ingrid Bergman in one of their steamiest roles and the stars high profile only boosted the films credibility, even for a Hitchcock led romantic drama.

As always, Hitchcock pushed things as far as he could, flouting production codes that only allowed for on camera kisses for up to three seconds. So Bergman and Grant alternated kissing with dialogue and sultry eye-play, for three minutes, whilst never leaving one another’s arms.

Some critics would view Notorious as a sign of Hitchcock’s thematic maturity, and that the films love story was a sign of change within his work. Indeed, the film was a watershed moment, as it marked the near end of Hitchcock’s “marriage” to David O. Selznick. As the story goes, the producer had fallen madly in love with actress Jennifer Jones, and was pouring all his attention into a film she was starring in. This “kind hand of fate”, left Hitch with little interference, allowing him to make the film as he envisioned. Although Hitchcock and Selznick made one last film together, the expensive flop The Paradine Case, it was clear that the reins were broken, and Hitchcock was free to be the filmmaker he wanted.

“The only way to get rid of my fears is to make films about them.”

In 1958, Hitchcock (who was now an American Citizen) directed and produced a film noir psychological thriller film called Vertigo. Starring James Stewart and Kim Novak, Hitch once again showed his technical talents with an array of spectacular effects and camera movements that showed off the main characters acrophobia. Vertigo was the first film to use the dolly zoom, an in-camera effect that distorts perspective to create disorientation. Thanks to use of Technicolour, Vertigo was a colourful, neon fuelled nightmare that had a heavy stylistic punch alongside shifting angles and inward-directed camera movements that denies the viewer any firm ground.

Whilst the film received mixed reviews from critics, it is often cited one of the defining works of his career. Hitchcock stated that Vertigo was one of his favourite films, and rightly so. Vertigo is a power house of film making.

“There is no terror in the bang, only in the anticipation of it.”

Hitchcock gave several leading men and women some of the best roles of their careers. For Cary Grant, that role came near the end of his career in 1959 (Grant only made 6 more films before retiring at the age of 62), in the form of an espionage film called North by Northwest. The film marked the only one Hitch ever made for MGM, and the script was an original creation by popular screen writer Ernest Lehman (now widely regarded as his best). Grant plays an advertising executive who, through a case of mistaken identity is pursued by agents from a mysterious organization.

Hitchcock put Grant through his paces, having him chased across the US, through New York, Michigan, South Dakota, and eventually Alaska. Once again, Hitchcock flexed his technical muscles and pulled out the most famous scenes in his entire film repertoire, with a scene that shows Grant being attacked by a crop-duster in a cornfield.

” Blondes make the best victims. They’re like virgin snow that shows up the bloody footprint”

Out of all of Hitchcock’s films, there is one that has been studied and written about more often than any other. With books, films and documentaries pouring over all the finder details, Psycho is so embedded in our culture that it’s hard to imagine how terrifying and strange it must have been for the people of

Hitch clearly knew he had something special, as Paramount only agreed to fund the project after the director deferred his salary in lieu of 60% of the film’s gross. The studio, believing that the film would do poorly at the box office, agreed. Famed title designer Saul Bass was brought on to storyboard the key scenes, and Hitchcock insisted that Bernard Herrmann write the score. The composer’s refused to accept a reduced fee for the film’s lower budget, but the results were astonishing and considered one of the scariest pieces of music ever composed. Hitchcock had told Herrmann not to put any music over the shower scenes, but the composer went ahead anyway, and Hitch loved the result.

During casting for the film, Hitchcock teased the press with photos of a director’s chair with “Mrs. Bates” written on the back, in the hope of keeping the film’s final twist a secret. Hitchcock would be photographed in that chair, along with nearly all the cast, every cast member, that is, except Anthony Perkins.

Psycho was filmed in black and white, despite the wide use of colour at the time, because Hitchcock realised that it would be too gory for viewers and censors in technicolour. The film was a global success and made over $500,000 at the box office. Thanks to his take of the films gross, Hitchcock become very rich.

“Dialogue should simply be a sound among other sounds, just something that comes out of the mouths of people whose eyes tell the story in visual terms”

By the 70s, most fans had given up hope of Hitchcock ever creating another film that could merit the scream that Psycho brought. But in 1972, the portly director delivered a nasty little something in the form of Frenzy. It was his second to last movie and a welcome return to the murder genre, after a series of unsuccessful espionage films. Hitchcock set and filmed Frenzy in London after many years of making films in the United States. Based mostly in and around Covent Garden, Hitchcock used the film as a homage to the London of his childhood, most noticeably, the market place in which his farther had worked for many years.

The film was controversially the first Hitchcock film to have nudity and one of his most controversial, as the film follows a sex killer, known as the Necktie Murderer, who brutally slays his victims. Never had Hitchcock been more visceral.

Henry Mancini was originally hired as the film’s composer but was fired when Hitchcock thought that his work was too close to that of Bernard Herrmann. ‘Look, if I want Herrmann, I’d ask for Herrmann.’

By the end of his career Hitchcock had collected many professional accolades including two Golden Globes, eight Laurel Awards, and five lifetime achievement awards. He was a five-time Academy Award nominee for Best Director and in 1940, his film Rebecca won the Oscar for Best Picture. In late 1979, Hitchcock was knighted by The Queen of England, making him Sir Alfred Hitchcock. On the 29th April 1980, 9:17AM, he died peacefully in his sleep. 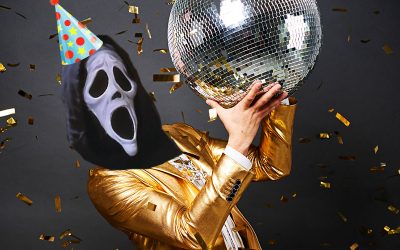 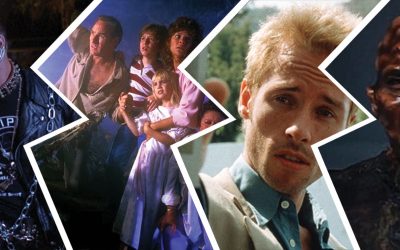 15 Rules of Horror (That Never Happen In Real Life)

Not in Real Life!

“Hey Horror Fans – Hitchcock once said that actors should be treated like cattle, and his disdain of improvisation is legendary. As soon as the screenplay was written, the film was finished. All he had to do was film it. Hitchcock is a legendary filmmaker, one whose work still resonates today. Keep an eye out for more legends of Horror with more ‘A Horror Fans Guide’ coming soon.