War of the Worlds Vs Independence Day 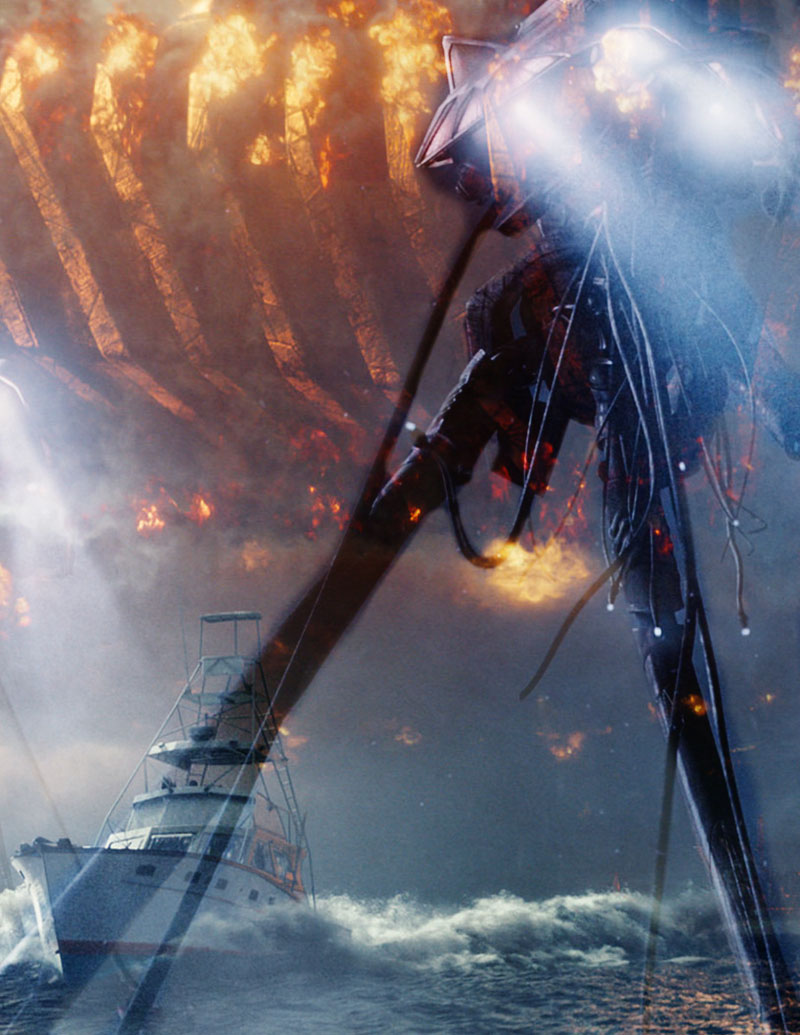 War of the Worlds Vs Independence Day

When it comes to alien invasions, there are two movies that immediately come to mind: War of the Worlds and Independence Day. The question is, which film deserves to be crowned the champion?

War of the Worlds is a classic sci-fi novel by H.G. Wells that tells the story of Earth being invaded by aliens from Mars. On the other hand, Independence Day is a blockbuster film starring Will Smith and Jeff Goldblum about invading aliens. There’s no doubt that these two films have had an impact on pop culture. But which one deserves to be crowned king? Read on and find out!

When deciding which Aliens deserves to be crowned champion, there are a few things to take into account. What makes a great alien invasion story?

First, the story should have some basis in reality. If it’s too far-fetched or doesn’t have any foundation in science then the story is likely laughable. Independence Day has this covered with its realistic portrayal of how aliens could potentially attack Earth.

Second, the science behind the story should be sound. Independence Day deals with cutting-edge technology, while War of the Worlds is more of a traditional invasion story which uses far more fanciful weaponry. Whilst both stories use fictional weaponry, there is some grounding for all the artillery used. Atomic weaponry could explain the vast devastation of the Independence Day “Doom Lasers” and chemical weaponry is already a terrible tool in modern day war, which could explain the Martians “Black Smoke”. 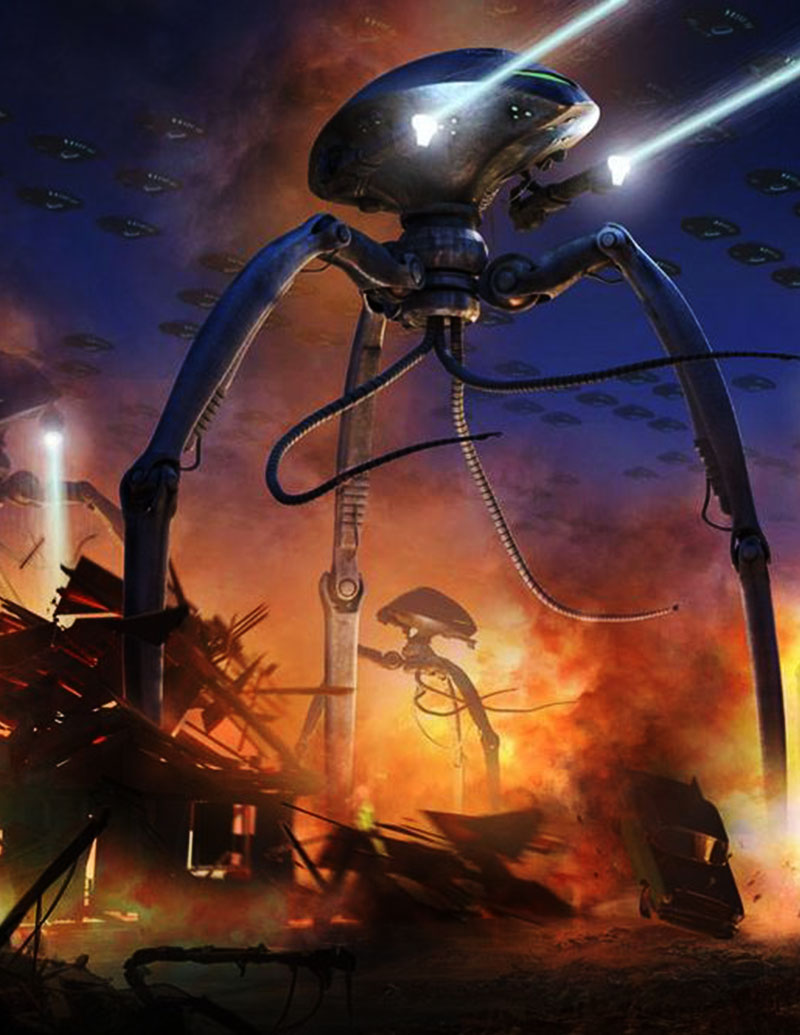 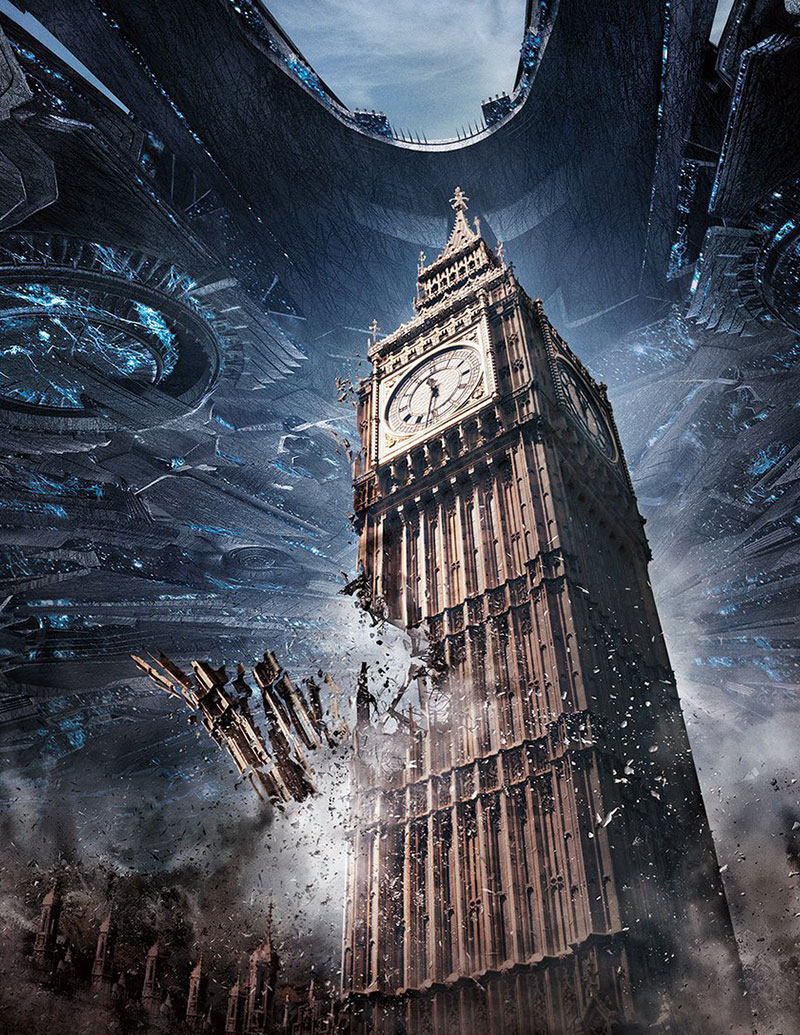 Third, there’s the human cost. When aliens invade, theirs undoubtable going to be high level of casualties, and it’s how the stories handle this that ultimately builds the tensions and dread.  Independence Day deals with mass destruction in a massive special effects spectacular. It’s heavy on the effects and careful to balance this out with the people affected by global attack. However, War of Worlds has always been a character driven story, and when it comes to showing the devastation left by the invading Martians, none come close to matching the harrowing tales of humanities ruin.

Finally, there needs to be a healthy dose of action and suspense in order to make a great alien invasion story! Remembering that War of the Worlds has dozens of film & TV adaptions, there is plenty of action to be had over years of media. But, does any of that match up to the devastating scenes of entire cities destroyed in Independence Day? It’s a tough call!

What’s the difference between War of the Worlds and Independence Day?

The first major difference between these two films is the tone. War of the Worlds is a tense, suspenseful film with a dark mood. In contrast, Independence Day has a more lighthearted feel to it.

As an example, many critics have pointed out that the tone of the 2005 Steven Spielberg film adaption, War of the Worlds, may be too much for its intended audience. In other words, it’s overly bleak and dark. Many went expecting a feel good action blockbuster and were shocked by the darker tone. Meanwhile, Independence Day includes moments of tragic devastation and suspense, but is carefully balanced buy it’s more playful and upbeat tone. 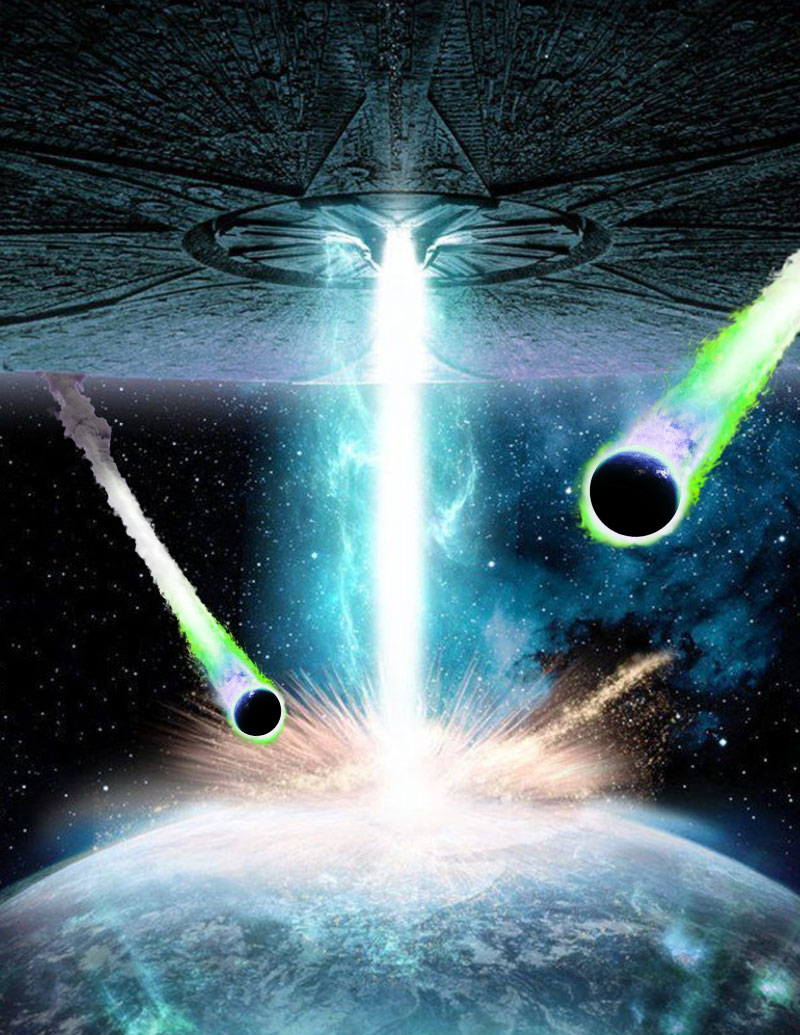 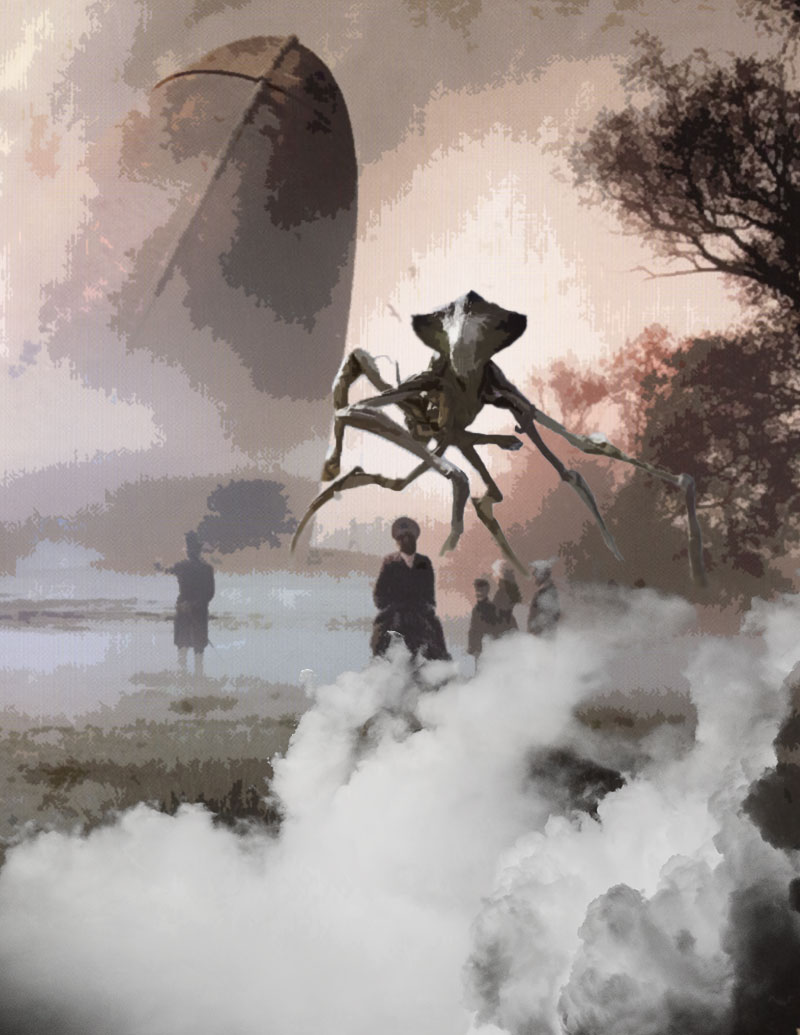 The stories also are very different. War of the Worlds tells of invaders from Mars, who arrive to earth in pods and take up arms in giant Tripods. Independence Day has it’s unnamed invaders arrive in giant spaceships. The Martians adopt a slow but steady assault, utilising “heat rays” and “black smoke”, whilst the ID aliens prefer a sudden simultaneous attack on the worlds major cities. One similarity comes in the form of the ending. Both invading forces are defeated by a virus, bacteria in WOTW and a computer virus in ID.

Another major difference is in terms of what you need in order to enjoy them. War of the Worlds is best enjoyed when you’re in your own home with all the lights off and the curtains closed. Independence Day, on the other hand, can be watched anywhere and is perfect when you’re looking for something lighthearted and fun!

War of the Worlds

War of the Worlds

H.G. Wells’ War of the Worlds was written in 1898 and is one of the first alien invasion stories ever written. It tells the story of an alien invasion from Mars that devastates Earth, as told by the unnamed Narrator.

The Martians arrive on earth in cylinders, which is from where they start to construct their Fighting Machines. The giant tripods are equipped with Heat Rays, which incinerate everything the beams touch. In the books, they are also armed with a much more devastating chemical weapon, which the narrator calls the black smoke. This smoke chokes all that breath it in, and it lingers in the air for days. The Machines are seen billowing the smoke with gusts of steam, pushing the toxic cloud further into the environment. Even after the Martians are defeated, the black smoke has become a global biohazard that saturates rivers, lakes and seas. 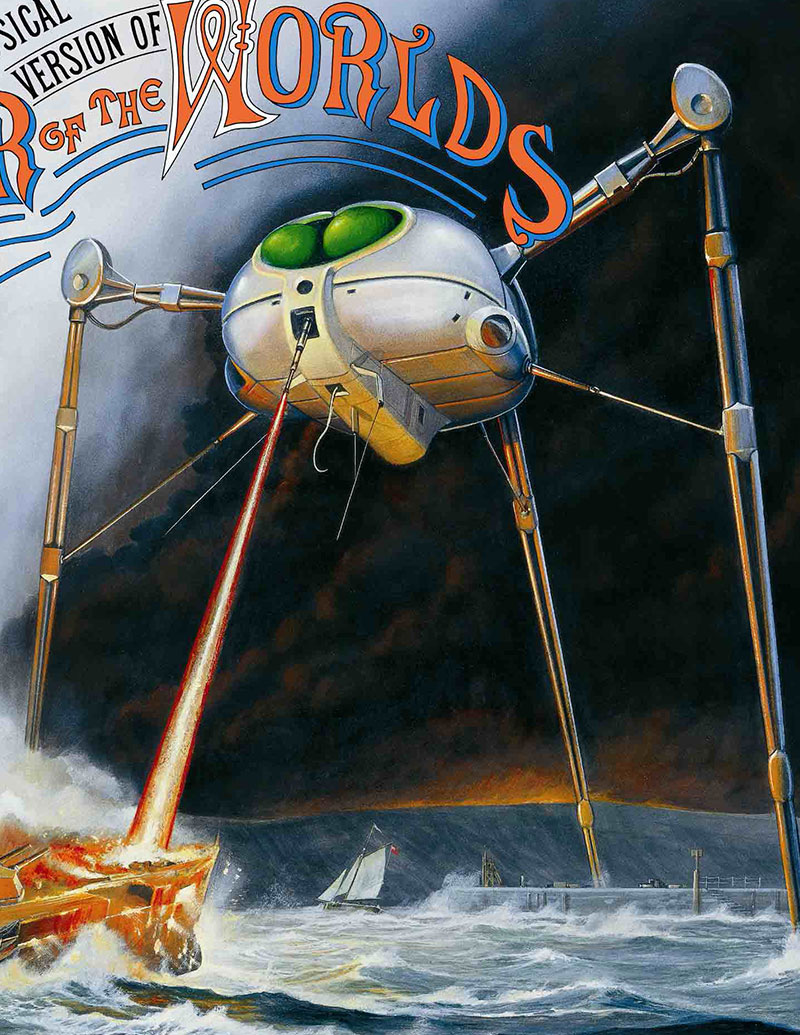 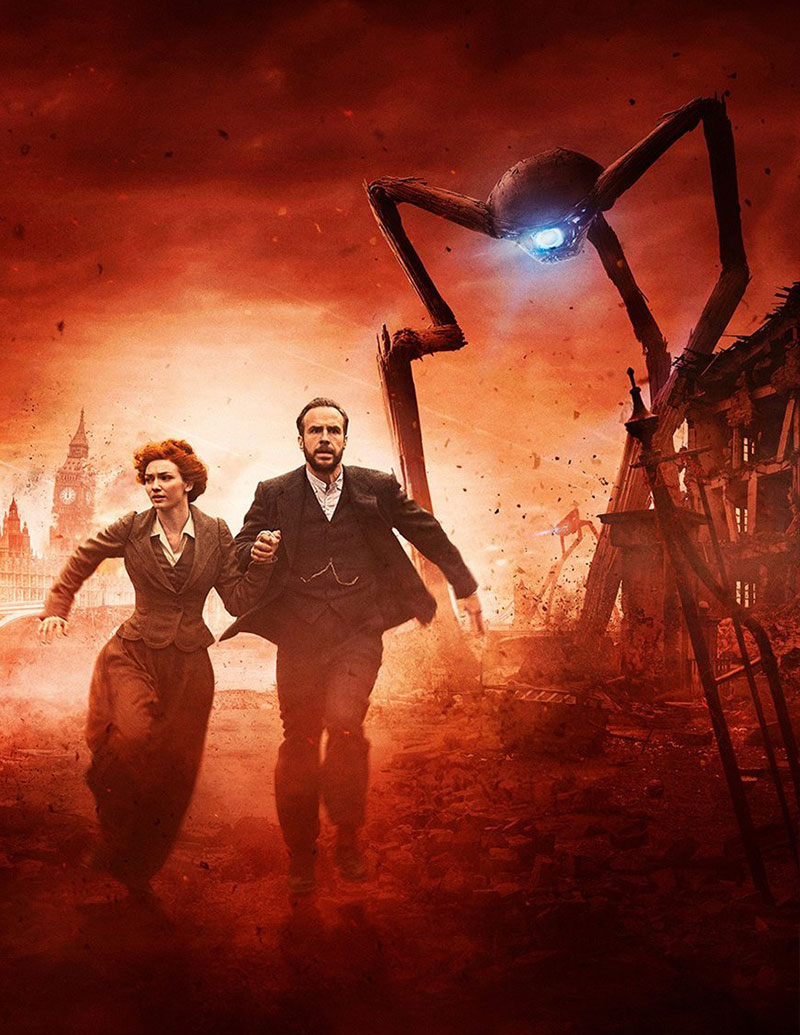 In the book, the Martians are described as being “A big greyish rounded bulk, the size, perhaps, of a bear”, with two large dark-coloured eyes and a lipless mouth of which quivered and panted. The films all take very different approaches to the creatures appearances, with some being bipedal creatures with one eye, to others being giant leg like tentacles that drip acid. One theme is constant, that the creatures feed off the humans they capture. In both the novel and 2005 film, the Martians are seen gathering up humans and placing them inside cages, like cattle.

In all the variations, the Martians rampage across towns, villages and cities, destroying all that they see, with their main goal to destroy humanity. As carefully orchestrated as is their invasion is, they did not plan for the bacteria that attacked their bodies, just as soon as they breathed the earths air and ate from humanity. With no immunity to earths various diseases, they Martians were doomed from the start.

This story not only sparked interest in science fiction but also became iconic for its depiction of human triumph against adversity. It has since been referenced in countless shows and other films as well as having an massive impact on pop culture. 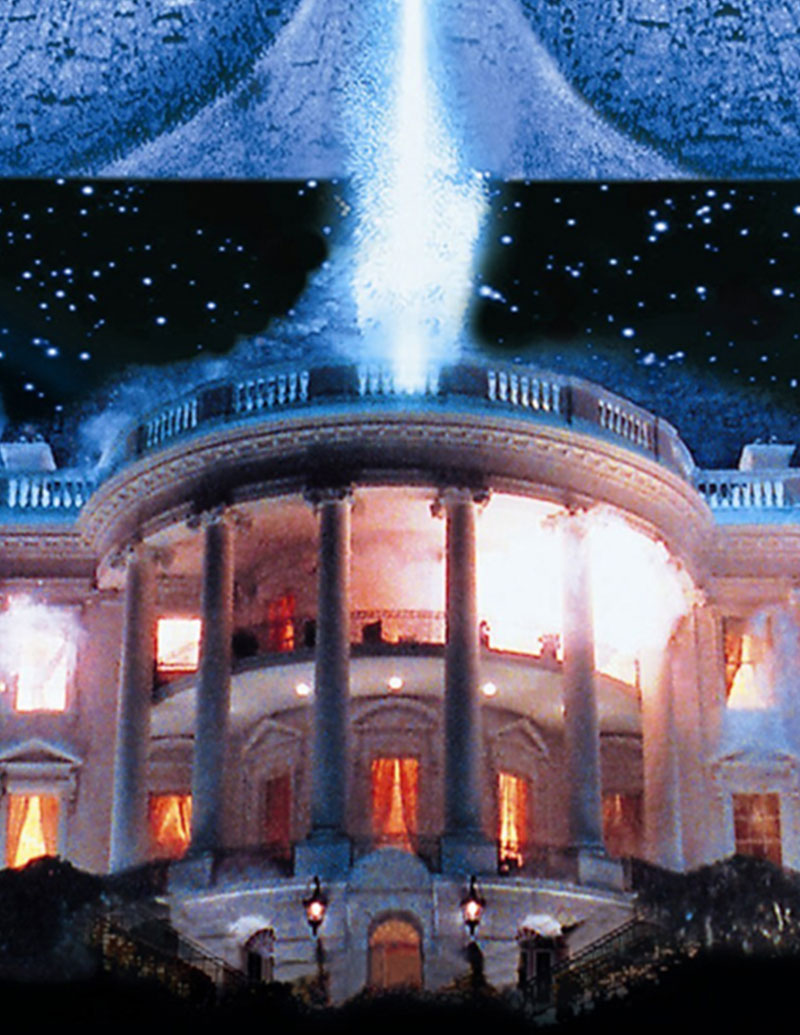 In this movie, aliens from a distant galaxy arrive to colonize Earth. After the UFO’s attack major cities, the U.S. government drafts a plan to fight against them with a specially trained team that includes Captain Steven Hiller and scientist Dr. David Levinson.

In July 2, 1996, an enormous alien mothership arrives in the orbit of the Earth and deploys multiple saucers, each fifteen-miles wide that take positions over some of Earth’s major cities. The saucers fire destructive beams that destroy the cities and kill millions. With the world in devastation, the world fights back but finds that aliens have strong defences shields that they can not penetrate.

The US come up with a plan to fight back, using crashed vessels that they have been studying for decades. Dr. David Levinson creates a computer virus that can disable the aliens systems and shields. With the virus planted, and the shields down, humanity fights back against the invaders, destroying the ships.

The aliens are a race of highly intelligent and incredibly technologically advanced hive-mind extra-terrestrial beings who intend to harvest all the earths resources, starting with the destruction of humanity. They appear to be are small, bluish-gray creatures that are quasi-humanoid with an enlarged head with two large pupil-less reflected eyes. Whilst piloting ships, they wear bio-suits that protect and sustain them.

They use large city killer vessels to deliver a devastating death ray which wipes out everything in it’s path. Each vessel also has a large fleet of fighter ships, which are deployed against humanities planes and armies. The smaller vessels are armed with either laser or plasma weapons that are highly destructive.

Ultimately, they are destroyed by their own systems, as a computer virus sweeps through their ships, rendering their defensive capabilities useless. 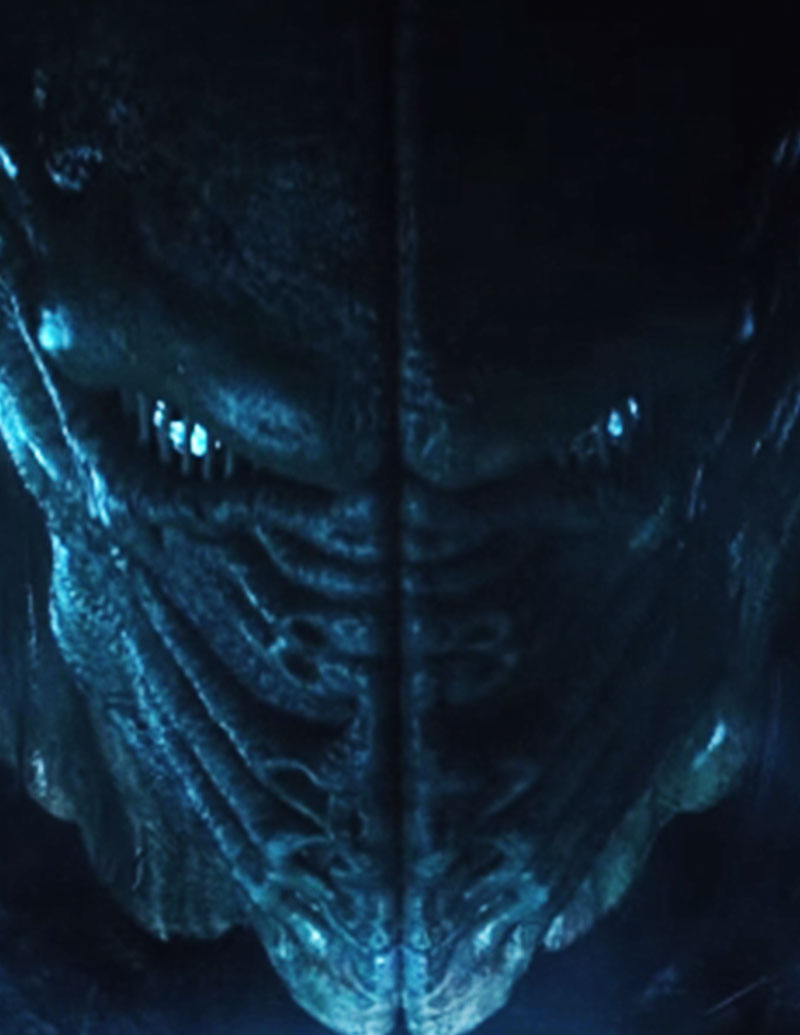 Independence Day went on to earn a massive $817.4 million globally, making it the second-highest-grossing film ever at that time. The film turned Will Smith into a global star, birthed one of the most famous speeches in cinema history, and is still widely seen as one of the best Alien Invasion films ever made.

Who is the Winner?

If the Independence Day aliens invaded Mars, it’s very obvious that the Martians would be fighting a losing battle, much like humanity did. The ID ships have a destructive force way beyond the Martians own defences. Even if the Martians had shields; as seen in many of the films, the merciless and single-minded pursuit of the ID aliens would surely overcome any defensive attack the Martians could throw at them.

Would a heat ray penetrate the ID defensive shields? It’s highly unlikely. Direct nuclear attacks are completely fruitless against the shield technology , so it’s safe to assume that the heat rays would be equally ineffective. With this in mind, a battle against a Martian Fighting machine and an ID alien fighter would be very one sided. With speed and flight being the ultimate top trump in this battle against the planets.

Even the Martians black smoke may not be effective against then invaders, as their defensive bio-suits would undoubtable filter any toxins. Though any unprotected ID alien would surely suffer against the deadly toxic clouds.

With the cards stacked up, it’s clear that in this The Ultimate Showdown, the winner of this battle would surely be Independence Day. The ID aliens have a far more aggressively effective tactics, better technology and an arsenal of devastating weaponry in which the Martians would have little chance in repelling.

On a more grounded view, War of the Worlds may be a classic, but Independence Day has more cultural significance, making it a far better story in which to invest in.