Did you know forests cover one third of the Earth’s land mass? Not only are they beautiful natural formations that provide us with a plethora of fauna & flora, they are also play a pivotal role in our struggle to control climate change. However, in the movies, most of the time, woodlands are dark and dangerous places filled with a maze of pathways, leading you further into a misty nightmare of twisted branches and dense foliage. The following list looks at some of the creepiest woodland scenes put in film, places you’d really not want to wander around in alone. Here is 12 Scariest Woodland Scenes in Horror Films.

Back in the 80’s The Evil Dead was just about the most terrifying thing you could watch, outside of the TV show Manimal. Base in a creepy little log cabin in the middle of lush woodland, the film follows 5 students who unwittingly unleash evil demons after a booze and weed fuelled evening. Besides the evil demons and the bloody axe driven dismemberments, the films terrifying atmosphere is drawn from the dense Tennessee woodland which surrounds the small cabin and the poor souls trapped inside. Director Sam Raimi, utilised the surrounding terrain in every way possible, from the POV of a the Kandarian Demon twisting through the misty forest floor, to the horrifying moment the woods come alive and sexually assault poor Cheryl. For a film filled with demons, incantations and dismemberment, these terrifying elements never detracts from the sinister character of their surroundings. A silent and deadly force at the heart of the woodlands that waits with inhuman patience for its next victim.

When it came to making a sequel, complicated rights issues prevented Raimi from using footage from The Evil Dead, so he just rebooted the story with the Evil Dead II. The sequel/remake kept many of the films original elements including the creepy ass possessed forest that attacks the poor folks inside the cabin. Alongside a gorier “tree attack” sequence, the film also features a bunch of walking trees that attempt to smash the cabin apart.

The 2013 remake of The Evil Dead works as a technical third outing to the cabin in the woods. Alongside evil books, demonic possession and more gore than you can shake a severed leg at, the film also did a great job of capturing the eerie presence of the surrounding woodland. The film even includes its very own take on the “tree attack”.  The Evil Dead manages to bring a much stronger macabre touch to the tale we know very well.

What’s more terrifying than getting in densely packed woodland that stretched for miles in every direction, getting lost in densely packed woodland that is literally one of the world’s most popular suicide spot.  Nestled at the foot of Mount Fuji sprawls a Japanese forest called Aokigahara. This dense thicket of trees stretches for 11 miles (around 30-square-kilometer) in the shadow of Japan’s larges mountain, and whilst it’s a place of unbridled beauty and serenity, it has a much darker side being dubbed the Suicide Forest, where people from around the world flock to hang themselves in the eerie silence of the gloomy woodland.

The Forest, a film from 2016, sets its stage in Aokigahara, following a young American woman named Sara Price (Natalie Dormer) who travels to Japan’s Suicide Forest in search of her missing twin with a troubled past. This low key horror is mostly overshadowed by it’s location, as the spooky woodland steals almost every scene, especially against a cast more wooden than the forest they are in. Whilst the film didn’t (or couldn’t?) shoot in the real life Aokigahara forest. It’s worth noting that Dormer actually went to the Suicide Forest with her Japanese driver for research on the film. She ventured five meters off the path to take photos and to take in the eerie environment. Her Japanese driver would not step half an inch over the path.

Sleepy Hollow is Tim Burton’s dark tale of horror about an 18th-century detective investigating a series of mysterious decapitations in a rural upstate New York village. This beautiful horror film features eccentric visual details that are quintessentially Burton, included the foggy, bare branched forest in which the villainous Headless Horseman roams. It’s dark, chilling but so much fun.

The Blair Witch Project is found-footage horror movie that is responsible for reviving the genre in the early noughties. This niece horror genre made it’s first tender steps in the 1990’s with Cannibal Holocaust, but it wasn’t until The Blair Witch Project, that genre really gained popularity, especially around the budget horror productions companies.

The film follows a group of college students as they attempt to uncover the mysteries surrounding the Blair Witch, a creature that is believed to inhabit the Black Hills forest in Maryland. The found-footage horror was filmed entirely in the woods of Maryland, with most of the actors never stepping foot inside a studio. This decision resulted in a movie that feels very real and authentic, which is one of the main reasons why viewers were so terrified by it. It’s much easier to believe that these things are actually happening when they are all shot with handheld cameras in real-life locations. The films settings are just as integral to the plot as the witch herself, making the Black Hills some of the most terrifying hiking grounds in the US.

No sequel could ever hold a candle to The Blair Witch Project, but filmmakers certainly do give it a good stab. The 2016 sequel improved upon the quality, but some might say that it was less restrained than it’s original, feeling it was necessary to show of the witch up front and personal. One thing it did right, was keeping the Black Hills forest as creepy as hell, making it feel more and more inhospitable as the film goes on.

Pet Sematary is a tragic horror tale from the pen of Stephen King. Set in a rural part of Maine, a young family discover a terrible secret behind their new home, a place that holds the power of life after death. The film’s journey beyond the Pet Sematary is a dark and terrifying experience that takes us deep inside dense woodlands filled with shadows and creepy sounds. Not a place you’d want to find yourself lost and alone in. Whilst the book goes into great detail about the nightmare inducing things that lurk in the woods, the 1989 film only hints at them. Don’t worry… It’s just a loon!

Whilst many of the older Friday the 13th ripp-offs have faded into obscurity, The 1980 slasher The Burning has managed to stand the test of time, being a film that feels unique enough to be an entertaining horror on it’s own merits. Yes, it’s set at a summer camp and features a group of teens being hunted down by a pycho looking for revenge, but that’s really where the similarities end.

Set in upstate Newyork, Camp Stonewater is an idyllic lakeside location, surrounded by lush green woodland that savagely counterpoints the films graphic and violent crimes.  The lakeside woods that surround the camp give no comfort to the poor souls being hunted by the films deformed serial killing caretaker. What makes Stonewater so creepy, is that killer ”Cropsy” murders in plain day light, not slouching around in the dark like so many other horror villains.

Another King story for our list, Salem’s Lot is the story of a small town invaded by vampires. In the 1979 TV mini series adaption, the vampires seem to have a strange control over the weather, creating a mysterious wind that blows over their victims. In one such instant, the woodland close to the home of Ralphie and Danny Glick is turned into a nightmarish thicket of fear, as the moon casts it’s cold light down into the wind swept forest and literally pops up to swallow the two frightened boys.

Probably one of the earliest examples of a “a cabin in the woods” styled movie, Lake of the Dead (1958) is a black and white Norwegian horror film that follows a group of friends determined to solve the mystery of their friend’s disappearance. This disturbingly beautiful piece of film manages to capture the stillness and quietness that hangs over the lake and the surrounding woodland. Beautiful, yet deeply disturbing.

It’s hard not to see certain parallels between Lake of the Dead and The Witch. Whilst thematically different, there are elements of cinematographer Ragnar Sørensen’s epic style. The Witch is a thought-provoking and visually compelling story about the despair of a 17th century and his family. After being banished from a Puritan colony, the family build a farm near a secluded forest, which is home to vial witch. The film uses the stillness of nature and the beauty (and ugliness) of nature to paint a chilling portrayal of live in the 1600’s. The films dark woodland setting adds a darkness to the film, that only nature; captured through the lens of a camera, can provide. 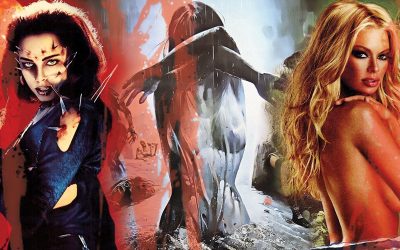 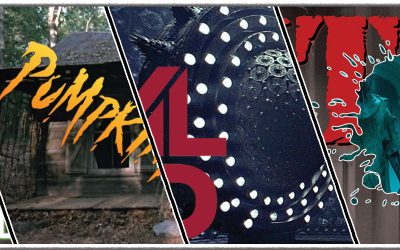 10 of the Creepiest Horror Locations

Spooky Places NOT to Visits!

“Hey Horror Fans – Well this list is just TREE-mendous. There’s nothing more atmospheric than a creepy woodland setting. What do you think? Can you think of any over creepy forests that might have slipped our list? Let us know in the commonest below.