Way back in MAY of last year we reported that Amazon was looking to merge with MGM, in order to absorb their huge back catalogue of films and IP’s. Well, it looks like the deal is done and Amazon is now free to push ahead with plans for various different film franchises.

As reported by Variety this morning, Amazon Closes the Acquisition of MGM with an eye watering purchase price of $8.5 Billion. Amongst the massive haul of films is James Bond, Rocky and Robocop, all of which are ripe for movies or TV shows for Amazons streaming service. Amazon now also own the IP to a huge amount of classic films such as Gone with the Wind, The Wizard of Oz and Cat on a Hot Tin Roof. Looking at other possible goldmines, The Pink Panther franchise is just DYING to plucked back into existence, whilst films such as Little Monsters (1989), Fearless Vampire Killers (1967) and Ghost World (2001) would all make epic TV series.

But lets dive into the GOOD stuff. What horror morsels have Amazon bought? Well, there’s a lot. For horror connoisseur, films such as Killer Klowns from Outer Space (1989), The Hunger (1983) and Leviathan (1989) are all on the table, alongside franchise such as Poltergeist, Pumpkinhead and Hannibal. There is also films such as Carrie (1974), Tank Girl (1995) and Soylent Green (1973), just to give you an idea of how deep this rabbit hole goes.

Now, we are not saying that Amazon are planning on doing anything with the mentioned films, but one thing is for sure, that there will suddenly be a far lot more films avaible on Amazon Prime, then there was before.

As for the future of MGM, we are not sure…

The companies have not yet disclosed what leadership will look like at the now-merged MGM and Amazon, where Jennifer Salke is currently the head of Amazon Studios and industry chatter has led to speculation she could serve as the chief of a combined studio. It’s unclear if MGM’s executive team, which includes film chief Michael De Luca and television group head Mark Burnett, will stay on after the merger.

“MGM has a nearly century-long legacy of producing exceptional entertainment, and we share their commitment to delivering a broad slate of original films and television shows to a global audience… We welcome MGM employees, creators, and talent to Prime Video and Amazon Studios, and we look forward to working together to create even more opportunities to deliver quality storytelling to our customers.”

What you can count on is a rich injection or new films and TV shows being developed in the next few years, all based on this epic merger. 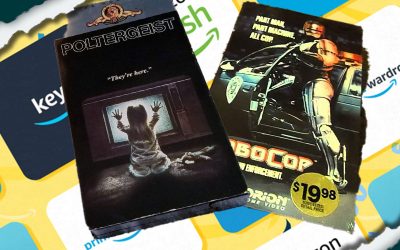 Poltergeist and Robocop up for Reboot in Amazon/MGM Merger

In a move that can only be measured next to Disney's purchase of FOX in March of 2019, Amazon have positioned them selves into a major film studio thanks to a massive merger with MGM, that will see thousands of IP's in the hands of the online giant. Amazon and MGM...