The independent tabletop game publisher Everything Epic have just just pulled something out of their six demon bag, the trailer for the ‘Big Trouble in Little China’ Board Game. Yep, the epic 1986 film is getting it’s very own tabletop adventure, and it’s ready to pre-order. Expected to ship out later this year, the game was developed by Chris Batarlis and Boris Polonsky, and it will allow you to play as Jack Burton or one of five other characters from the film.

The game is being described as a “strategy adventure game that allows 1-4 players to experience the events they remember from the film as well as create new adventures of their own.”. Your ultimate goal is to defeat the immortal ghost-sorcerer Lo Pan’ , his three storms and his deadly army. Through missions, you’ll level your character up, until you are ready to enter Lo Pan’s underground lair and defeat the evil that lies there. It sounds like hours, if not days of fun.

There is a secret world where ancient evil weaves a modern mystery… they call it Little China. It’s where Big Trouble was waiting for Jack Burton and his friends as they uncover an ancient diabolical plot. The evil minions of the immortal ghost-sorcerer Lo Pan are waiting to chop down the players with axes and guns in dark alleys and all throughout the battle-torn streets of Chinatown. Now, Jack, Wang, Gracie, and the rest of the gang must muster up all of their courage, survive against hordes of baddies, and then face off in a showdown with the darkest demon of them all Lo Pan!

Your choices actually impact the game! Players will have meaningful story choices to make within the quests which result in taking different paths each time a quest is played, discovering a new part of the story, and adding to the replayability.

Players will use Action Dice to complete quest tasks. Using all of your skills and abilities, channeling your Body, Mind, and Spirit towards overcoming the evil of Lo Pan and his minions! 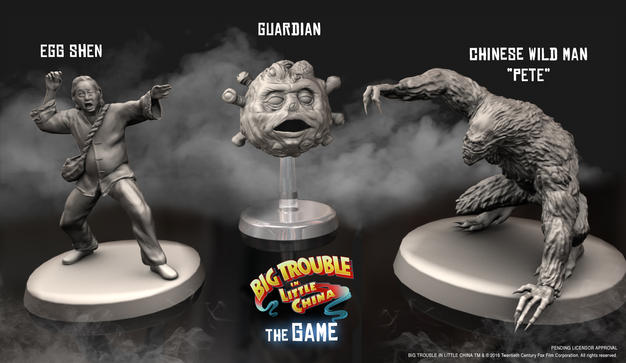 Standing in your way is Lo Pan’s unchecked criminal organization the Wing Kong, who run rampant throughout Chinatown. Lords of Death, Hatchet Men, and his Security Forces battle against our heroes supported by Lo Pan’s greatest assets, the mythical Three Storms!

Each villain has their own attack, defense, movement, as well as their own thematic special abilities to keep the immersion going and make you feel like you’re in the movie every step of the way.

The Deluxe Limited Edition of Big Trouble in Little China: the Game is being created with the biggest fans of the film in mind. We wanted to say thank you to those who believe in our project as much as we do and to give them something special for pre-ordering the game.

The core game will allow for 1-4 players, but the Deluxe edition will increase the number of possible players to six!. The Deluxe edition will also include the Legacy of Lo Pan quests, with new rewards and hell cards, which give players an entirely new campaign-style experience and a new Lo Pan Boss board for an even more challenging and replayable showdown. All these extras will come in a unique metallic gold Limited Edition box design and more! 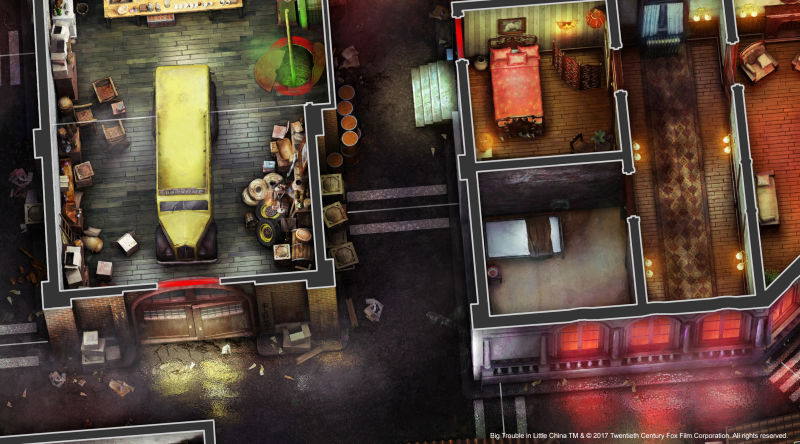 A brand new trailer showcases the gameplay explains how Jack Burton and his pals will face off against the evil Lo Pan and his minions.

We have ordered ours. Have you order YOURS yet? Yes sir..the check is in the mail.