MGM and Orion have pulled out their first poster for their upcoming Child’s Play remake, and with a release date also now set, this shit has just got real! Yep, Child’s Play is getting a remake, Donald Trump is STILL President and the Lizard People are sure to take over the world in the next few weeks. In the top ten of crazy stuff going on at the moment, a re-make of the classic killer doll film is definitely up there at the top of the list.

You could argue that a continuation might not be the best route for the series, with Don Mancini’s Curse of Chucky hitting VOD/DVD instead of theatres back in 2013, but despite the quality of the “Chucky” films slowly getting worse, Mancini firmly believes in Chuckys legacy, and plans more films and a TV series for your friend to the end.

This remake is a cash grab for MGM and Orion, who hope to reboot the series with a brand new Doll and direction, in hoping of grabbing the (super popular right now) generational nostalgia market and new fans. Meet “Buddi”!

As much as I can speculate on how bad or good this film will be, I find it hard to find a place for this new take on a fan favourite, in today’s busy horror market. Even more so when you look at the films release date, 21st June 2019, that sits it firmly on top of Toy Story 2 and The Grudge. With purse string pretty tight on cinema visit at the moment, families will have to fight over seeing Buzz and Woody back in the saddle for a tear jerking new entry (according to Tom Hanks) or get the babysitters out for a more adult evening with Child’s Play of The Grudge. And i’m just going to point out the Lin Shaye has already sold The Grudge remake to me. One thing is for sure June is certainly looking crowded.

The new film will follow the same beat of the original, with a mother buying her son a Doll, that turns homicidal.  No supernatural shenanigans here though, Buddi will be a robotic toy that goes haywire! starring Gabriel Bateman, Aubrey Plaza and Brian Tyree Henry, the film is pretty low key on cast (and probably budget too!).

You can meet “Buddi” super soon when the trailer hits, but for now, enjoy the poster below, unveiling the brand new boxed doll and release date. 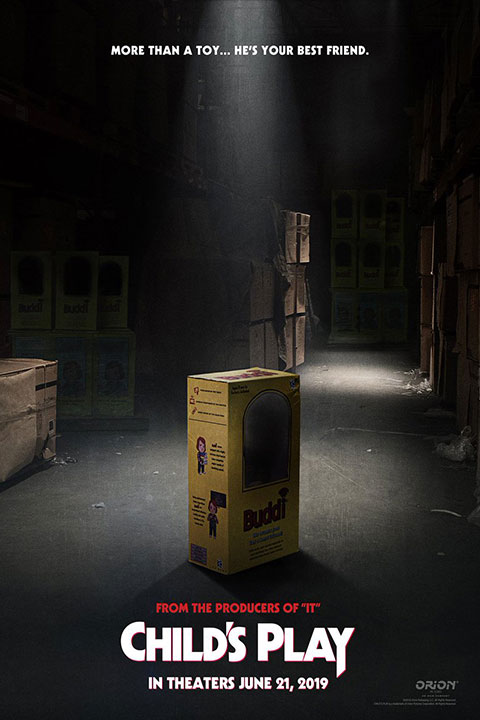