Director Fede Alvarez is celebrated 9 years of his Evil Dead remake with a series of post over on Twitter. One of the most mind melting things he has dropped so far is a share a previously unreleased Evil Dead alternate ending. This is a piece of video that didn’t even make it into the DVD/BluRay box and is just about the coolest thing your going to see today.

Alvarez brought back the Evil Dead franchise in 2013 after it had stalled for many years, creating a reboot that stepped to the same beat of the original. The new film followed Five friends who decide to spend a weekend in a remote cabin located deep in the forest. When they accidentally summon a dormant demon, they are thrust into a deadly game of survival against an evil force they can’t begging to comprehend. Standing in for franchise hero Ash Williams ( Bruce Campbell) is protagonist Mia Allen (Jane Levy) who ends up being the lone survivor of the film.

The never before seen footage shows us the original ending shot for the film, one that is a massive homage to Sam Raimi’s original 1981 cult classic.

Here it is. This is what was written originally. But Sam Raimi (wisely) pointed out “after everything she’s been through, she deserves to live” so I rewrote it to the actual ending. (@jcolburnlevy let out one of her best screams in the movie on this take) #EvilDead9years pic.twitter.com/q0PFWCT7Pw

But that was not the end of the story. Alvarez also teases us with an un-shot screen play that see’s Mia explode.

Here. I found the page from the first draft. There was a bit more action to follow the force catching up with her. #EvilDead9years pic.twitter.com/hJ7UAB6k4K — Fede Alvarez (@fedalvar) April 6, 2022

Bloody Disgusting quickly pointed out that Alvarez had hinted at all of this previously on their Boo Crew Pod Cast.

“In the script, we went a little bit further and we say, well, that’s what we saw in the original movie, so I think we should see more this time,” he continued. “So we will do this shot, and after she turns and screams, we will see what happened to her. It was written as she levitates for the first time – because you never see levitation in the movie. It was kind of the rules of [our] Evil Dead, to never see anything that tells you right away that you’re in a supernatural world. So no one floats [in] Evil Dead. But in the last moment, she will float.”

I think this new ending would, in some ways, would have been much better than the ending we got. I thin k a strong homage to the original film would have been just the kick at the end that fans needed.

Would you have preferred this ending? Let us know in the comments below or on Facebook, Twitter, or Instagram! Or head over to our Fans Page to join like minded horror fans. You can also carry on the convo with me personally on Twitter @Lallen_UK 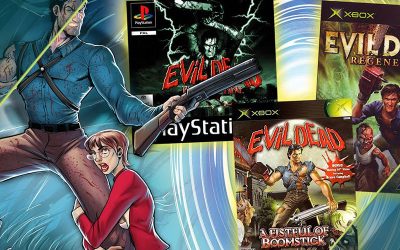 The Good, The Bad & The Evil Dead Games

Not all games are made evenly, especially when your looking at games based off of a horror franchise that features demons, guns and chainsaws. The Evil Dead started off as an indie horror film, featuring Bruce Campbell, which hit cinemas in 1981. As video games... 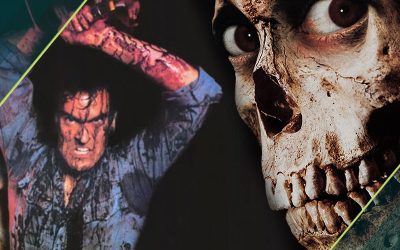 Have you ever been confused between the continuity between The Evil Dead and Evil Dead 2? For fans of the series, the Evil Dead 2's continuity has always been some thing well debated. Is a sequel or remake? Well, star Bruce Campbell is at hand to clear things up. This... 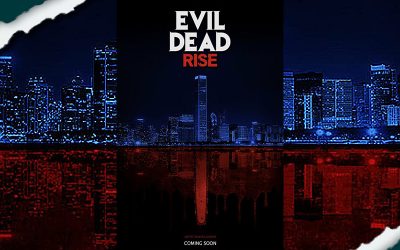