Monsters come in all shapes and sizes. And when it comes to shear volume of monsters, creatures’ aliens and mutants, no decade did them more justice than the 80’s. Here is a nasty little list of things that not only go bump in the middle of the night, but they also bump back and bite. Here are 20 Top Movie Monster From the 80s.

Summoning up demonic forces in the hopes of gaining supernatural powers, Jonathan Graves (Peter Liapis), a college student who inherits his late father’s occult paraphernalia, accidentally calls upon the Ghoulies. These small demonic creatures that have a wide range of twisted appearances and a thirst for bloody murder.

Obsessive scientist Dr. Pretorius (Ted Sorel) successfully discovers a way to access a parallel universe of pleasure by tapping into the brain’s pineal gland. When he is seemingly killed by forces from this other dimension, his assistant, Dr. Crawford Tillinghast (Jeffrey Combs), is accused of the murder. Desperate to prove his innocence, Crawford returns to the parallel universe only to draw out Dr. Pretorius, who has transformed into a new hideous form. It’s a little slow to get off the ground, but this mean monster movie really picks up once the hideous Dr. Pretorius creature shows up.

Colin Childress (Jeffrey Combs), a highly successful comic book artist who gains inspiration from a mystical book of horrific drawings, inadvertently summons an evil spirit into his basement studio. This cult horror boats impressive practical FX which brings to life the satanic beast, with his sharp fangs and bloodthirsty claws.

TerrorVision is a sci-fi horror comedy buffet about an insatious alien creature who travels to earth on TV waves and invades the home of a dysfunctional family. Arriving at a point when creature practical effects were hitting their peak, TerrorVision delivers impressive visions of tongue-in-check horror and nasty looking gore.

Ridley Scott’s fantasy fable Legend is a wonderfully twisted tale about a young Princess who accidentally damns humanity to darkness. The adventure film stars Tom Cruise as the young wildling who must save the Princess and the world. Thanks to its fantasy setting, the film is chock block full of creatures, including goblins, witches, and an almost unrecognizable Tim Curry as a hulking red demon with giant horns. You want monsters… you’ve got them!

3 years after his abduction by aliens, Sam returns to earth to seeks his wife and son but discovers that his family have moved on. This bastard cousin of Steven Spielberg’s E.T. brings with it a ton of gory effects and an impressively nasty looking alien that is happy to snack on anything, including, Doritos, snakes and the ex wife’s new boyfriend.

The Return Of The Living Dead is the tongue in cheeky sequel to George A. Romero’s Night of the Living Dead. Director Dan O’Bannon wanted to differentiate it from Romero’s films, so he took the film in a distinct new direction. This comedy horror brought the zombies to life in a brand-new way, giving them a mean attitude and a hunger for human brains. One of the films highlights is the “Tar Man” zombie, performed by actor and puppeteer Allan Trautman. This infamous face of horror was so popular, he even returned for the film’s sequel.

Based on Clive Barker’s short story of the same name, Rawhead Rex focuses on a monstrous pagan god who rampaging through the Irish countryside. With impressive creature effects and a design that looks like something out of a comic book, Rawhead Rex looks great.. but boy is he bad!

Frank Henenlotter’s insane masterpiece is the creature feature with a pulse. The film follows a grotesquely deformed basket dwelling Siamese twin who joins forces with his brother in order to take revenge on the physician who separated them at birth. The Snaggle-toothed Belial is the sympathetic movie monster that you’ll love to hate. This is grimy, perverse filmmaking at it’s best.

A terrifying, centuries-old prediction comes true when spectators in a movie theatre start to transform into bloodthirsty, fanged creatures. These Demons start to spread panic and bloody mayhem in an 80’s fuelled horror filled with many different crazy creature creations. Despite the hammy acting and odd plot, this gory romp is a fabulous exercise in classic 80s horror.

The Gate is a 1987 supernatural horror film starring Stephen Dorff in his film debut. The film follows two young boys who accidentally release a horde of demons that they accidentally summon via a huge hole in the back garden. The film is filled with wonderful creatures, terrifying monsters, and a giant demon with a hand fetish. It is a creature feature with a lot of bloody charm.

Sam Raimi’s classic 80’s horror film tells of five friends who travel to a remote cabin in the woods where they accidentally summon demons when they play a tape with incantations. The low budget horror is one of the most lost horror films ever made, and much of that is down to its creepy atmosphere and honest acting from it’s cast. The film’s demons are horrifically spine-chilling and make this monster movie worth multiple viewings.

Ghostbusters might be a light-hearted supernatural comedy film, but what makes it so appealing is its convincing pre-digital aged spooks and spectres. The many ghost, demons and zombies that appear in the movie are simply hair-raising. The films highlights have to the demonic Terror Dogs and Staypuft Marshmallow Man who dominate the films third act.

Joe Dante’s creature feature is possible one of this list most charming movies. Set in an idyllic little suburban town, a young man accidentally unleashes terrifying Gremlins on his neighbourhood. The green meanies rampage is brough to life through a mixture of puppetry and animatronics, which is perfect for this film’s aesthetics. The Gremlins manage to steal the show over its fleshier cast, which is remarkable consider they are made of metal and latex.

Werewolf – An American Werewolf In London (1981)

An American Werewolf In London’s legacy will always be for its outstanding practical effects. This werewolf movie could easily have fallen a little dead if it were not for the fantastic transformation effects, the grisly undead corpses and the werewolf puppetry, that connivingly brings a werewolf to the centre of London. This is a creature feature with bite!

David Cronenberg’s cautionary tale about science gone wrong manages to pack a huge punch. The Fly features dozens of gory set pieces and its fantastic cast ease the story along to the films horrifying Finale and the reveal of the Brundlefly, a human/fly hybrid that is truly the most grotesque looking thing ever.

Hellraiser is Clive Barkers twisted tale about a man who escape the eternal torment of a demonic realm. This dark and bloody film introduced the world to the coenobites, monstrous and twisted beings’ intent on torturing the souls of those who call upon them. The films practical and makeup effects are phenomenal, making this a monster movie with a striking visual impact.

Arnold Schwarzenegger epic jungle action-adventure film blends two genres almost seamlessly, thanks to the film’s settings, effects and muscle-bound acting. The films first act is all war and action, but when the films elite mercenary rescue team encounter a strange presence in the sweltering jungle, the films turn into a chilling sci-fi horror. The Predator’s creature design is literally out of this world. It is the creature’s aesthetics and hunting sensibilities that caught the audience imaginations and has spawned a huge franchise, including many crossovers. The most notable being the Alien Vs Predator series that spawned from the pages of a comic and is now two big budget movies.

Ridley Scott’s visionary Alien film managed to make space travel terrifying. Before the 1979 hit Alien, it was all rubber monsters and tin foil sets. Scott broke away from this and left a dark legacy in his path. However, it was James Cameron 1986 take on the film, Aliens, that helped to launch a massive franchise. Introducing us to a whole nest of Xenomorphs, a monstrous egg laying queen and bunch of cocky Space marines for them to feats on, Aliens is a mega thrill ride with more twist and turns than a roller coaster, but with more screaming!

John Carpenter broke the mould when he brought his science fiction horror film The Thing to the big screen. In the film, a biological alien creature, capable of imitating other species, attacking a remote Antarctica research site. The shapeshifting creations are brought to life entirely with animatronics and practical effects work that are so impressive, there is still no film that has managed to do a better job. Even a 2011 prequel, using a mixture of practical and VFX techniques, failed to even come close to Carpenter’s original. This is monster movie that really tears at your stomach and leaves you bleeding all over the snow. 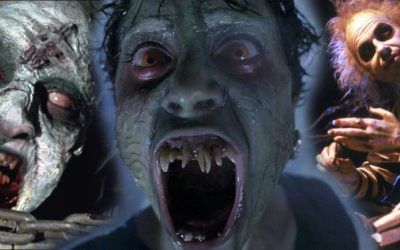 “Hello Horror Fans – I do love a good film I can get my teeth into. There’s nothing better than watching some dripping, mutating, monstrosity chasing after poor teen. Did you like our list? Let us know in the comments below!