Filming is Real Horror for IT Neighbour

Not everyone is thrilled with the new production of Stephen Kings IT. Following our first look at Finn Wolfhard as Richie Tozier yesterday, we have other news, from CBC News, that the film crew are causing a bit of an nuisance for residents of Riverdale in Toronto. The Crew are busy shooting an old mansion in town and neighbours are complaining that the crews has broken city by-laws, by shooting without proper notice and littering.

The heritage mansion where the shooting is taking place, called Cranfield House, was built in 1902 and is about 18,000 square feet, it’s mostly empty, but since April, it’s been a hive of activity as crews have been setting up for internal and external shooting on the property. 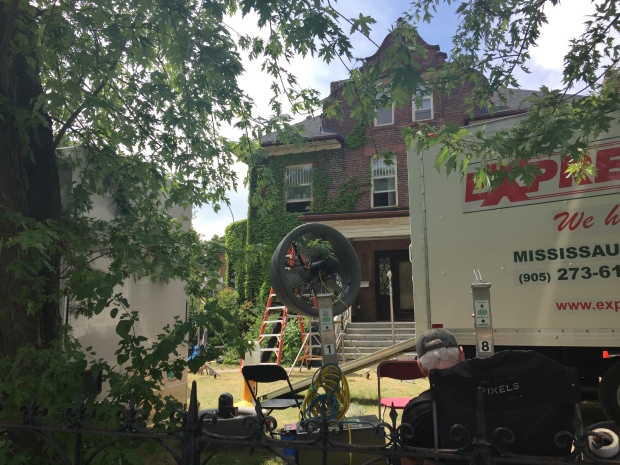 For Nick Shcherban, who lives in the house next door, the crew are a huge nuisance. He says

“Film crews trespassed on our property … smoke in front of our house, they litter, (there’s) excessive noise from generators.I’ve been complaining about the air conditioning unit. This morning[it]woke us up before six o’clock. It makes so much noise it vibrates into the house.”

Shcherban knows the location is appealing to television and film location scouts but says the city shouldn’t approve more productions there. Other neighbours say they don’t mind but they admit, they’re not right next door to it either.

Zaib Shaikh, the city’s film commissioner says his office is working with the production company to ensure there’s minimal disruption to neighbours. In the mean time, Mr Shcherban claims that his wife Cindy left to stay with relatives until the filming ends. Beep Beep Nick, it could be worse, blood could be pouring from your sink!