How Debra Morgan & The Trinity Killer Will Return for ‘Dexter’

Showtime’s upcoming revival of Dexter has already got fans super excited about it’s return, but with more and more cast members being confirmed, many have been wondering exactly what will be happening in the new limited series. Arthur Mitchell a.k.a. the Trinity Killer, had already been announced to return, despite being dead since the end of series four, and now Deadline confirm that actress Jennifer Carpenter will be returning as darkly dreaming Dexter’s potty mouthed sister Debra Morgan. And yes…Debra is also dead.

John Lithgow, who brought the Trinity Killer to life, spoke with Deadline about his return and he wanted to clear up a few things about his, and Debra’s, return.

“As all Dexter fans know, we saw the end of the Trinity Killer, so that by definition means it’s a flashback…”

Yes Dexter fans, sadly Debra and other dead character will only be appearing as flashbacks. Lithgow revealed that he worked for one day—”in fact, one afternoon” on the new show. However, Lithgow’s comments do not really delve into any details, so it’s still very possible that we may get the original ending that was envisioned for the Bay Harbor Butcher!

“Set 10 years after Dexter Morgan went missing in the eye of Hurricane Laura, the revival sees the character now living under an assumed name in a world away from Miami.”

Clyde Phillips served as an executive producer and showrunner on Dexter in the early years, leaving after series four, which was in fact the year we met Trinity. With Clyde returning for the limited 10 series episode, it’s very possible that he is bringing his original ending into fruition. Talking with E-online back in 2013, he spoke about how he wanted Dexter to End.

In the very last scene of the series, Dexter wakes up. And everybody is going to think, ‘Oh, it was a dream.’ And then the camera pulls back and back and back and then we realize, ‘No, it’s not a dream.’ Dexter’s opening his eyes and he’s on the execution table at the Florida Penitentiary. They’re just starting to administer the drugs and he looks out through the window to the observation gallery.

More news as it dug up!

Are you excited about more Dexter? Let us know in the comments below or on Facebook, Twitter, or Instagram! You can also carry on the convo with me personally on Twitter @Lallen_UK
Stay in, Stay Safe, Love Horror! 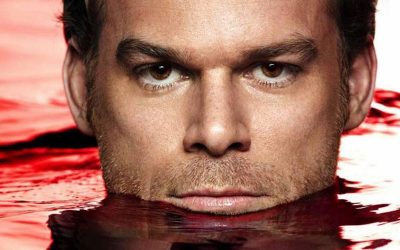 Holy shit horror fans… you may want to grab yourself a seat as we have some news that might just make your legs wobbly. It’s been officially announced that our favourite crime fighting serial killer will be returning to our screens after an eight year break. Yep,...