You may not want to tempt fate and say Candyman’s name five times in a mirror, but how about tweeting it instead? That is what the first publicity shot for Nia DaCosta’s highly-anticipated Candyman is asking you as a teaser and poster buzz online!

DaCosta’s spiritual sequel to Bernard Rose’s 1992 horror classic is due in cinemas this year and promises to share the sinew and muscles of the Candyman mythos, but sending it in a new direction. Our very first official look at the new horror is via the films official twitter handle, and it promises to share a sneak peak with anyone brave enough to tweet his name five times. With many people taking to twitter to conjure up the spirit, a  brief teaser soon found it’s way online.

Dare to say his name.

@ian_sandwell Prepare to be hooked. The first trailer for #Candyman drops Thursday. pic.twitter.com/BlIksfmMos

We also have an official poster which dials back the dark tones with a simple white background and a hook coated in honey, a single bee perched on top. The trailer will drop tomorrow and we’ll get our first look at Aquaman’s Yahya Abdul-Mateen II as the titualer spook! 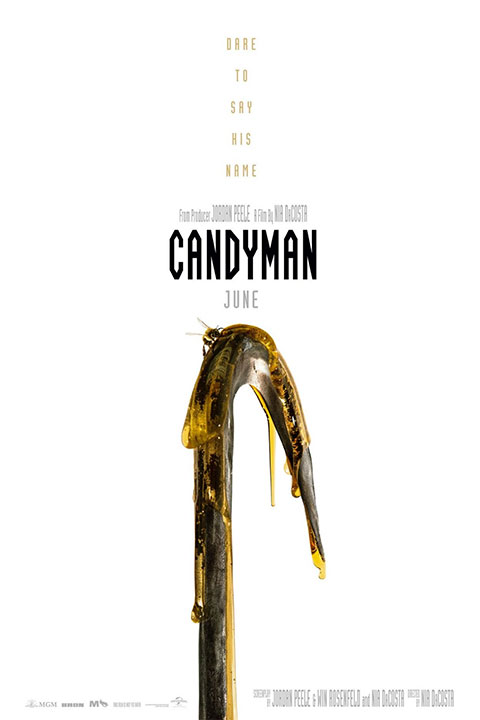