Spin my nipple nuts! It looks like the old rouge one might be getting a mega spring clean when series XII with airs in the Autumn, as the very first image emerges from a mail pod. The new images reveals that the entire crew have gone Droid, in a no doubt high jinxed episode. The hilarious image shows The Cat (Danny John-Jules), Rimmer (Chris Barrie) and Lister (Craig Charles)  have all becomes mechanoids. But they can’t really complain, their faces have not looked that smooth in centuries.

As Robert Llewellyn (Kryten) has gone under the prosthetics knife for years, it looks like he can finally get his own back on the rest of the cast. Empire had a chat with the crew to see what they thought.

Barrie: “Sitting in it and waiting is always the hardest bit. When you’re working I’m not bothered about it, but when you’re having to wait, and you’re in the mask and you can’t do anything, you’re thinking ‘is this going to come off?’”

Charles: “It was so uncomfortable, so hot, I thought I was crying at one point but I wasn’t, I was sweating through my eyes!”

John-Jules: “The problem was, the sweat sort of collects under the mask but outside it was about -5 degrees. So we’d run out to get fresh air and then nearly die of pneumonia! 28 years of guilt, of calling [Robert] a big wuss. We literally went out bowing to him.”

Look to the skies in the Autumn when Red Dwarf returns to Dave. Smeeeeeeegg Heeeeeaaaddds! 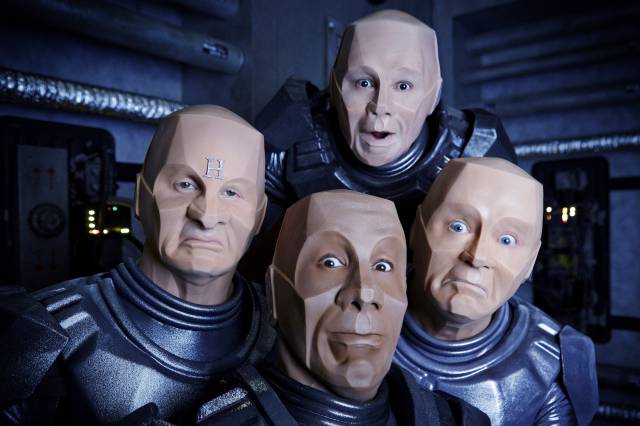