To celebrate the it’s big episode, which it jokeling says was “planned from the beginning”, the show’s producer has dropped a cool new poster to wet your whistle (below). And boy is it a good one. Lisa Simpson takes front stage as Eleven (played by Millie Bobby Brown in the Netflix show) sporting a shaved head and a bloody nose, whilst Chief Wiggum is clearly supposed to be Jim Hopper (David Harbour’s most famous role). Like most Treehouse of horrors, there’s other shows/films being parodied, with Selma Bouvier and Kang’s channeling Guillermo del Toro’s 2017 hit The Shape of Water. There’s also something with Homer’s and a Monkey but we have yet to figure that out yet. For sure, all things will become clear very soon.

The episode will be the 4th episode of Season 31. Talking of numbers, It will also be the 30th installment of the Treehouse of Horror series, on top of it being the 666th episode of the show. Wow!

“The 30th Treehouse of Horror features a demon Maggie, a mission to rescue Milhouse from another dimension, dead-Homer’s spirit trying on some new bodies for size and Selma finally finding love in an unlikely place – the alien in the basement.”

Fan’s of the show may also want to check out The Simpsons Tapped Out mobile game, which will find the Halloween update hitting Sometime in the next week or so. There’s currently a mini Halloween event running until the 8th of october, which is when we believe the full event should drop. 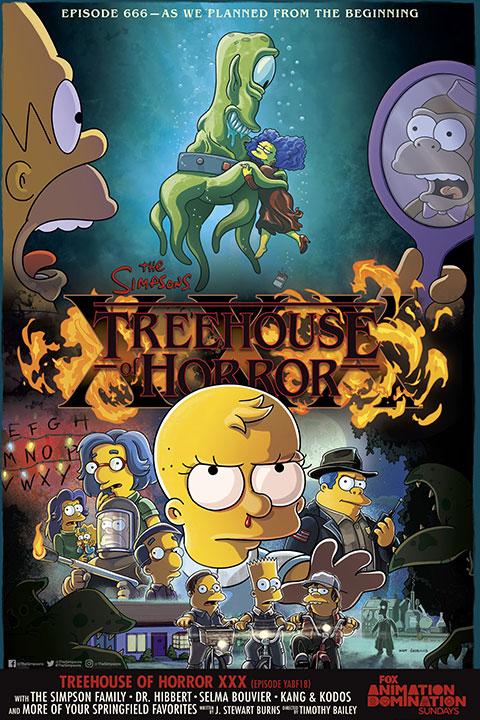