Homer Tate pioneered the roadside attraction that quickly grew in popularity during the 1940’s and 50’s, by fabricating monstrous creations that would draw in curious tourists from across the country. Pioneering dark tourism and creating the world’s first roadside freak-show museums. We look at the man, the myths and his lasting legacy.

The “Feejee” Mermaid – The Birth of Hoax’s

Many might accidentally attribute P. T. Barnum, founder of Barnum & Bailey Circus, for the worlds first documented freakshow hoax. However, the creature that started it all originated in the hands of another collector of strange things.

In 1842, Barnum’s American Museum introduced a rather peculiar and headline grabbing exhibit, that of the “Feejee” mermaid. It was an object composed of the torso and head of a juvenile monkey sewn to the back half of a fish. It was said to be a monstrous sight, with fish scales and twisted limbs, alongside pendulous breasts and bared fangs. Whilst Barnum cashed in on the glory of this grotesque creature, with people flocking far and wide to glimpse the beast, the creature actually came from the collection of a man named Moses Kimball.

Kimball was a museum owner that had in his possession a number of oddities, and it was his reputation for such that put the Feejee mermaid into his collection. The creature came from an American sea captain, Samuel Barrett Edes, who had bought the mermaid in 1822 from Dutch traders who acquired it in Japan. The mermaid is believed to have been created by Japanese fishermen as a religious icon for ceremonial purposes. It bared all the marks of a ningyo (meaning ‘human-fish’) which is widely represented in some Japanese Shinto and Buddhist shrines. The ningyo mermaids are traditionally shown with a curved tail and their hands held up to their face in a display of terror, which is reminiscent of the Munch painting “The Scream.” Intrigued by the creation, real or fake, Barnum rented the creature for his Museum.

With the huge popularity of the exhibit, Kimball was inspired to “obtain” other mermaids, some of which survived to this very day. However, Barnum’s original “Feejee” mermaid was sadly lost to history, most probably destroyed in one of the many fires that devastated parts of his collection. The fire could not burn away the Feejee mermaid’s legacy, and soon others felt inspired to create their own attractions, things that would truly terrify and amaze.

Homer Tate was born on September 7th 1884, to a pioneer family in Poetry, Texas. As it was common for young men caught up in the progress of the early twentieth century, Tate found himself trying his hands at several different vocations. He was a miner, a farmer, a sheriff, and eventually the owner of a hotel and gas station in Safford, Arizona. But family life and a steady job did not quenched the siren’s call of destiny, and in 1945, Tate picked up his family and move to Phoenix to start his museum and curiosity shop.

He started his trade making papier-mache dioramas depicting little slices of life, such as workers picking cotton, kids playing in school playgrounds and church ceremonies. But, whilst the dioramas were fun to look at, they were harder to sell. Ever the consummate practical joker, he started to craft more sinister creations, such as shrunken heads and necklaces of hands, fingers and ears, all of which were available to buy at a reasonable price. Made from newspaper, glue and shoe polish, his terrifying creations were a sure-fire hit for road weary travelers looking to kill some time before getting back to the road.

As his wares become more popular, the more elaborate the creations become. Adding bones and bits of animal carcasses to his repertoire of materials, he created such things as mummies, Devil Boys and Fish Girls. However, it wasn’t just his artistic talent that made these fakes so convincingly real, Tate also created lavish backstories for his creations, lending an air of authenticity to them.

Some of his more detailed work included a series of small Devil-Men, that all came with their own stories and caskets. For many years, these creepy looking fakes were the subject of much publicity and skepticism, as newspapers, magazines and books all pondered over the existence of real life pygmy styled devil men. One of the most haunting of creation was Clahuchu and his Bride, known and feared as “they who creep at night”. These two shrunken  mummified figures were displayed in a lidded box with the following description

“These Shrunken Mummified Figures were found in a crude tomb like cave on the island of Haiti in 1740 by a party of French Marines, they are supposed to be the remains of the last tribe of “Ju-Ju” or Devil Men … Who After Death followed a custom of Shrinking & Mummifying their dead,

Whilst the description and creatures certainly feel like an genuine and horrifying find, the clue to their authenticity is on the lid. YENOH M’I DLOC! The words are a basic transposition cipher which translates as “Honey I’m Cold”, a nod towards the creatures near naked composition. Tate was, after all, a real joker.

Tate is among only a handful of people whose faux work is considered to be collectible, mainly due to his medium of choice, which has made his creations a modern day rarity. Though he created his artworks from unconventional materials like hair, feathers, bones and claws, they were largely fashioned of papier-mache, a material susceptible to time and water. This has caused many of his works to deteriorate over the years. It’s not just the macabre craftsmanship, but the relative rarity of Tate pieces in good condition that have turned them into modern day pieces of art.

However, the largest factor that deprived the world of many of Tate’s creations was his devout Mormon family, who believed his work to be abominations. When Tate fell fowl of the law in the 1950’s, his family quickly emptied his museum whilst he was cooling his heels in prison. The mummies and devil boys, dragon snakes and shrunken heads were all stored in a hangar used for storing crop-dusters and were quickly forget about.

Tate spend his last few years devoted to poetry and died in 1975. When the family sold the crop-dusting business in 1980, they cleared out all the hangers, including the one used to store the museum pieces. Due to the way they had been stored, there was not much left of them. Many of the pieces had become infested with bugs, due to the hair and fur, and the rest had rotted away in the heat. Tate’s collection of oddities and creations were quickly disposed of. However, there was one piece, Tate’s magnum opus, that still exists to this day in the manor of which it was created, as a roadside museum exhibit.

The Thing – The Ultimate Legacy of Homer Tate

As the self-proclaimed “Mystery of the Desert, one of Tate’s most famous pieces of work now sits in a Arizona museum as the center piece of it’s collection. The Thing was purchased from Tate back in 1965 by former lawyer Thomas Binkley Prince, who quickly turned it into a tourist attraction. The thing is a mummified mother and child displayed in a coffin with a Plexiglas lid. There are many stories around it’s origins, such as them being illegal border crossers who were found and slaughtered by unknown cowboy bandits, but the true allure of the Thing is it’s mystery surrounding it. Whilst we know it’s just another of Tate’s gruesome creations, it’s the excitement of the unknown that lends itself to the idea that The Thing may just be real.

70 odd years on and The Thing is just as popular today as it ever was. Maybe it’s the 30 odd billboards that beckon gullible travelers to check out the mystery of The Thing? Maybe it’s the grandiose build up to seeing the creature, through a cave like setting that sees you following giant monster foot prints,  or maybe it’s the call of the creature itself that draws in crowds. One thing is for sure, that Homer Tate’s fertile imagination spawned creations that are still haunting our dreams, and feeding our fears. The Thing is the culmination of Homer Tate life’s work and goals, to shock and entertain. Whilst his work survives, we will always have a vastly different world, a world were mer-men and devil boys are real. A world where mummies are displayed at a gas station stop-offs, and you can you view them for just $5. It’s a beautiful world filled with dark things for rock bottom prices.

Was Freddy Krueger Really Innocent in A Nightmare on Elm Street? 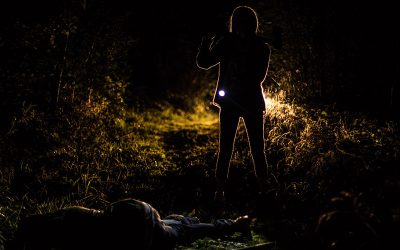 Why We Fear The Dark And How To Overcome It!

Why do we get chills when walking into a dark room? Lets find out!

“Hello Horror Fans – An old AXE of mine once sent me a stuffed alligator with the head of a turkey. That sat on my mantle piece for a long time. I wonder what other twisted horrors are sat on peoples shelves, or are stored in peoples attics. Let us know your dark thoughts in the comments below.