10 Movie Stars That Have Played Death

10 Movie Stars That Have Played Death

The dudes got a mean cape, a sharp scythe and long list, and he knows your name. I’m of course talking about the personification of death, the Grim Reaper. Cinema has had an obsession with Death for many years, seeing many different interpretations of the great shrouded one. From your classic hooded figure, to more abstract versions such as in The Final Destination films, we have seen many different version of The Grim Reaper. One of the most iconic representation, and the one that has stuck within the public consciousness, is the one from The Seventh Seal. Bengt Ekerot took the role of Death in the 1957 Ingmar Bergman film, which sees him as a pale, black-cowled figure resembling a monk. Many version thereafter, including several from our list, borrow this portrayal.

It’s not all about the look though, it’s about the man behind the face paint and cloak. A good actor can turn this deathly personification, into a sympatric or likeable character. And thats what our list is about. We took a long look and here are 10 Movie Stars that have played Death.

Fredric March plays Death, who decides to take a holiday from his usual business, to see what it is like to be a mortal. Posing as Prince Sirki, he spends 3 days with Duke Lambert and his guests at his dukal estate. Despite his true Nature one woman falls in love with him. Forgoing the classic cloak for a three piece suite, Fredric March’s Death is a suave and sophisticated man, with an air or frustrated urgency and anger.

Gramps (Lionel Barrymore) is concerned for his grandson’s future and wary of a scheming relative who seeks Pud’s custody. One day Mr. Brink–an agent of Death–arrives to take Gramps “to the land where the woodbine twineth.” Through a bit of trickery, Gramps confines Mr. Brink, and thus Death, to the top of an old apple tree, giving Gramps extra time to resolve issues about Pud’s future. Cedric Hardwicke Death is a charismatic man who wears a Hat and Trench coat. Despite his sullen performance, he manages to come across as being honest and trusting.

A knight (Max von Sydow) returning from the Crusades, encounters Death (Bengt Ekerot), personified as a pale, black-cowled figure. The Knight proceeds to challenge death to game of Chess, believing he can delay his own demise whilst Death is distracted. The films bleak vision of the world is only offset by the amazing performance by the film Stella cast. Death is a an ever present threat throughout the film, and Ekerot plays him with a glib cynicism.

Peter Cushing superbly underplays his role plays as Dr. Schreck, a mysterious gentleman who joins five men on a train carriage bound for Bradley. The doctor opens a pack of Tarot cards (which he calls his “House of Horrors”)  and tells each of the men’s futures, setting the scene for five stories revolving around each passenger.  Each fortune tells of a grisly destiny and a turn of the last Tarot card reveals the ominous appearance of the death card. the Doctor informs the men that the only way they can avoid these horrible destinies is by dying first. As the pass through a tunnel, the Doctor vanishes. When the train stops, the men find out that they are dead, having already perished in a train wreck. From the Smokey platform, Dr. Schreck is revealed to be Death himself.

The Meaning Of Life is one of Monty Pythons crowning achievements. With hilarious sketches stretching from inception to the afterlife, the Python crew out do themselves with a hilariously honest look at our fragile and confusing lives.  One of the stand out moments comes when an irritated Death gate crashes an international dinner party.  John Cleese’s grouchy, grisly voiced Death has perfect comedy timing and eloquently humorous come backs for the annoying diner guests, that just won’t die!  With eye-poking and a deadly salmon mousse, the entire sketch show-cases just why Monty Python are still so popular today.

Joe Estevez plays the Soul Taker, a mysterious unseen man in black, who is trying to track down four souls that managed to evade him after a car crash. Joe Estevez plays death with a Stoney infatuation, as he becomes obsessed with finding the teens lost souls. Possibly one of the poorer performances on our list, but Estevez’s interpretation is interesting. With his bland, pained, expression and black garb, he hunts the teens down like a classic teen slasher, always a few steps behind.

In a funny twist to this list, Ian McKellen actually plays Bengt Ekerot’s version of Death. You see in Last Action Hero, Danny Madigan has magic ticket that brings the movies to life, in which he uses to meet his movie idol Jack Slater. During an explosive gun fight, the ticket lands in front of a movie theatre showing The Seventh Seal, and Death (played now by Ian McKellen) walks out of the movie, much to the dismay of the patrons watching the film. In full cloak and with his scythe in hand, Death walks the streets of New York, touching an overweight cop as he passes, who suddenly clutches his throat and starts to wheeze and cough. Death tracks down slater and Danny to an old Movie theatre. Death notices that Slater is not on his list (but Danny is due decades later) and advises Danny on how to save the dying Jack Slater. McKellen’s death is a humourless pale figure, but shows a touch of compassion when he helps Danny.

In a story within a story, author Harry Block (Woody Allen) tries to distract a gun toting ex-partner by telling her about his new book, a semi-autobiographical story of a sex-obsessed young man named Harvey (Tobey Maguire) who is mistakenly claimed by Death.  Harvey impersonates a friend called Wendell, using his flat to sleep with a prostitute. When Death comes knocking at the door for Wendell, Harvey tires tom explain that he is not Wendell, but Death is not convinced. This personification is a cloaked character with a booming loud voice, shrouded in a thick mist.

William Salder plays a parody version of The Seventh Seal’s Death, who is challenged to by Bill (Alex Winter) and Ted (Keanu Reeves) after they are killed by robot doppelgangers. Instead of Chess, Death finds himself constantly losing at family games such as Battle Ships, Cludo and Twister. Death eventually concedes and follows the Wild Stallions on their journey to save the future. Sadler’s Death is a humble character that is not afraid to get himself dirty and even manages to be quite humorous, despite his pale and gaunt appearance (and smelly feet).

You could say that Meet Joe Black is a remake of Death Takes a Holiday, but it’s tone and story are so far from that of the 1934 film, that its clearly an entity of its own, despite sharing similar DNA.  Brad Pitts Death is a creature looking for a taste of real life. It wants a holiday from his taxing, eternal responsibility of taking the souls of the dead to the afterlife, and he chooses William Parish (Anthony Hopkins) as his guide to the world of Mortals.  Taking the name of Joe Black, William teaches Death the meaning of true love and all it encompasses, especially honesty and sacrifice.

Bard Plays Joe with a calm and pragmatic manner, but with touch of mystery. Dropping a Hollywood heart throb into the role was either crazy or genius, but it works well. Pit’s self-confidence on set gives Death a strangely authoritative personality. 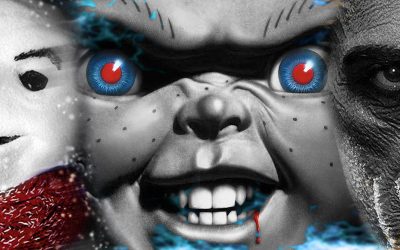 So you’ve Been Resurrected in a Movie! Now What? 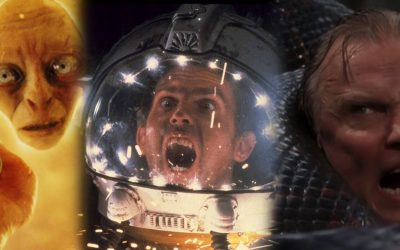 The Worst Ways to Die in Film – With Science

“Sup Horror Fans – “Don’t fear the Reaper, baby I’m your man”. Oh Boy what a cool list, I love some of those older films. It’s a real TRIP up memory lane. I was surprised not to see The Frighteners on this list, but some GOBLIN just informed me that DEATH was not AXEually in the film. Lets hope that YOUR names not on the grim reapers list….at this time!