For many centuries, being burned alive has been a form of capital punishment. Used by many different civilisations throughout history, it  has been used to punish crimes such as treason, incest , homosexuality and  witchcraft. The classic method of this execution is the victim being tied to a large wooden stake, with kindle and fire wood at it’s base. Set alight, the victim would die quickly in the flames. The most notable examples of this type of execution were witnessed during 16th and 17th centuries, during the infamouse Witch Hunts. It is claimed that as many as 200,000 people were burned for witchcraft in Europe alone.

In film, setting someone alight is a quick and easy way of getting our hearts racing and emotions screaming. We all learn from a very early age the dangers of fire. It’s a primordial fear. If used correctly, it can be a powerful tool to shock and awe the audience. There are five different types of fire attacks; Sacrifice, Justice, Cleanse, Manslaughter and Murder. They are all present in horror and represented here with these five films.

With an all star cast including Edward Woodward,  Ingrid Pitt and the late, great, Christopher Lee,  The Wickerman is a twisted tale of corruption and innocence, as Police Sergeant Neil Howie seraches for a missing child.

Travelling to the isolated island of Summerisle, Howie discovers that find the inhabitants practise a form of Celtic paganism and are possibly going to sacrifice the missing child to please their gods. It does not end well for the poor Police Sergeant, as he finds out that HE is the real sacrifice, and is dragged kicking and screaming to a giant”wickerman” statue, where he is burnt alive. The denizen dance and sing, celebrating the event as the sun slowly sets in the distance. 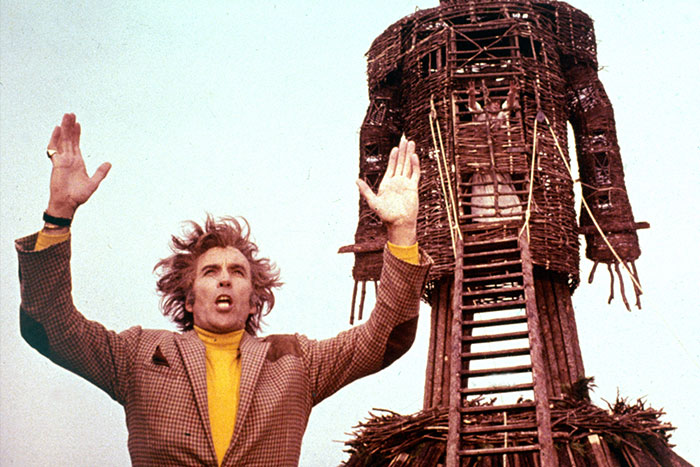 The burning of the hero makes for a morbid and uneasy watch. Whilst the film is often regarded as one of the greatest horror films of our time, It does not make it any easier to enjoy. It’s not a film to be watched, but rather experienced, as the fiery end will leave you cold! 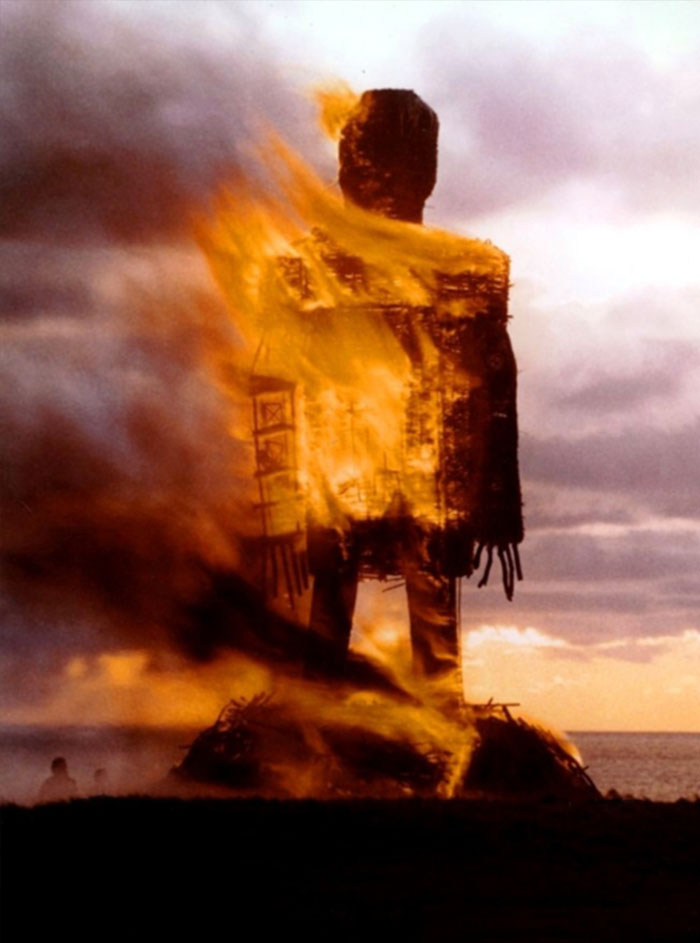 The human sacrifice, such as seen in The Wikcerman, has a basic motive, the perpetuating power and good fortune through the influence of gods and demons. This type of sacrifice was mostly done with children, as they represented innocence and purity. First records indicate that this type of sacrifice started around 3rd century BC and have continued right up to modern times. These modern day events are not as  institutionalized as they used to be way back when, and reports of this type of death are thankfully rare.

Being the most prominent films on the list, A Nightmare on Elm Street is a franchise spanning 9 films and even a TV series. It all started when the towns folk of Springwood decided to take justice into their own hands, burning alive suspected child killer Fred Kruger. This crazed mob had no idea that their action would spawn something far more devastating. Feeding off the dreams of the children, Kruger returned as demon, a burned nightmare figure who slowly kills off the Springwood youth with his trademark fedora and clawed gloves. 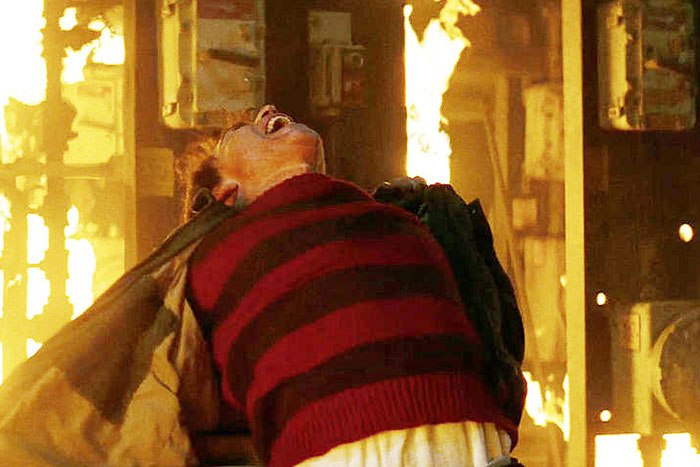 Freddy Kruger is murder by the townsfolk in a burning hell inferno. His terrible pain is shown through the horrific scars that he took with him into the after life. Vigilante Justice is never a pretty thing to watch in film, and here we see why, as the angry people of Springfield corner Kruger and burn him alive with petrol and Molotov Cocktail bombs. 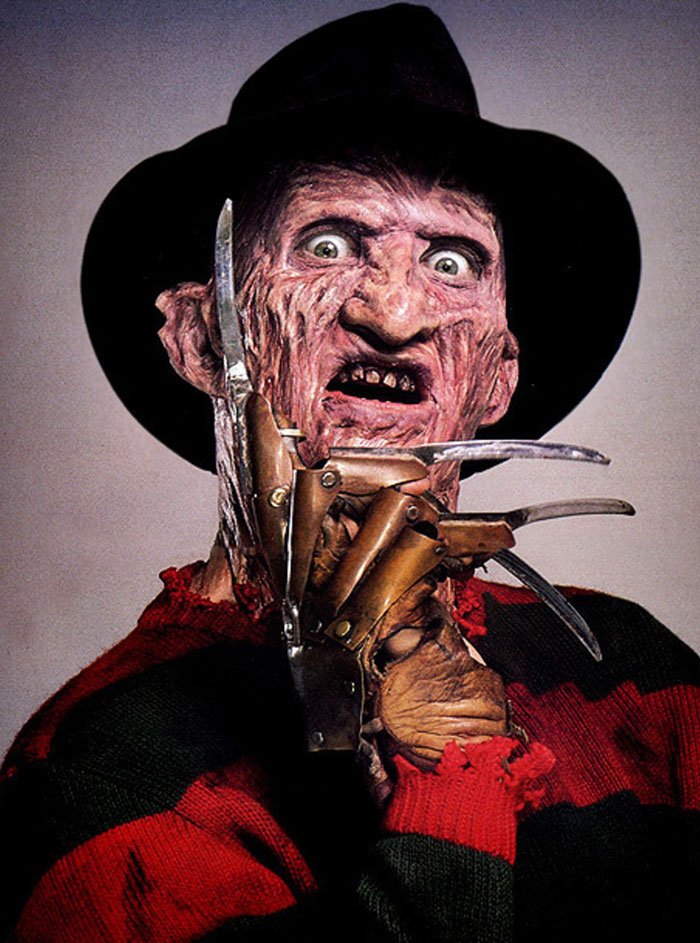 Revenge is best served cold, so says an old Klingon proverb, but in this case, it’s burning hot. Being burned alive has been an age old punishment dating back beyond record. 18th century BC Babylonia burned people for incest and Ancient Egypt burned women for adultery. It is no longer an excepted form of execution but is still being used as vigilante justice  in the Middle East and Indian.

Sometimes, you need to burn it with fire. Doctor Loomis, having tracked down the psychotic Killer Michael Myers, to a local hospital, uses his last resort to stop the madman. He blows Myers up in a fiery ball of carnage. 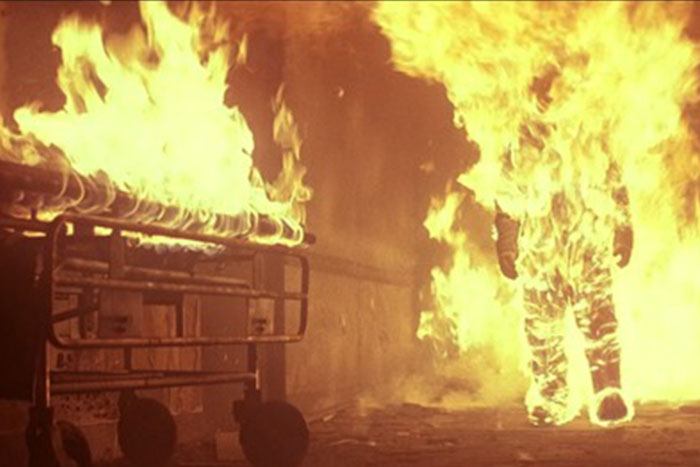 Myers is engulf in a huge explosion and is seen staggering down a corridor engulfed in flame. He falls to the floor,  seemingly over come by the flames. However, in this popular franchise , Myers does not die, however he is badly scarred from his ordeal. The Non canon sequel , Halloween resurrection also see Myers dying in flames, fire seeming to be the only thing that can stop him.

This “cleansing” is a popular horror trope. Many characters have found death in the smouldering embrace of fire, and many fictional characters have been defeated with fire as an aid. Think of the villagers taking up pitchforks and burning torches to confront Dracula, Frankenstein or the Wolfman. Would they have been so brave with out the protection that fire brings? 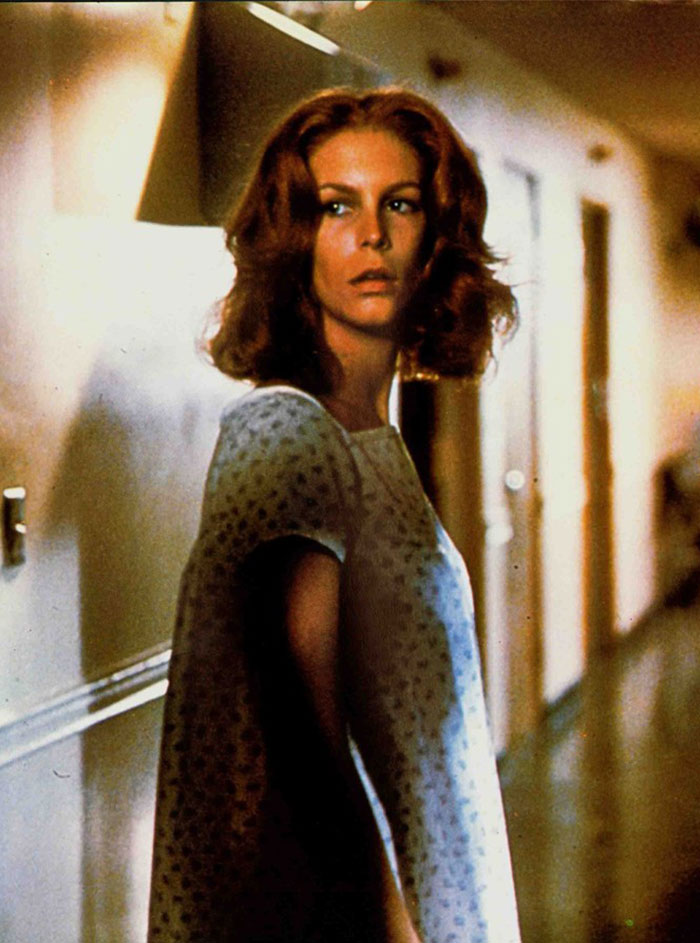 Fire has always been seen as a cleanser of evil. The Bible speaks of three agents of cleansing: blood, water and fire. It speaks of burning away the “chaff” (rubbish) leaving only righteousness. Taken literally, throughout history, people believed that evil can be burned away. Seen here Halloween II and many other films, the Evil is vanquished with flames, burning away all the terrible deeds and hopefully ending the terror that had ensued.

Mistaking Helen Lyle for the Candyman, The residence of the Cabrini–Green housing project set a community bonfire alight, hoping to kill the fabled killer. Helen had crawled in there to save a baby that the Candyman had placed inside. He had intending to sacrifice them both to feed his own legend. Helen fights off the Candyman and crawl through the intense flame to rescue the young child. Knowing that the child is safe, Helen dies of her horrific burns. 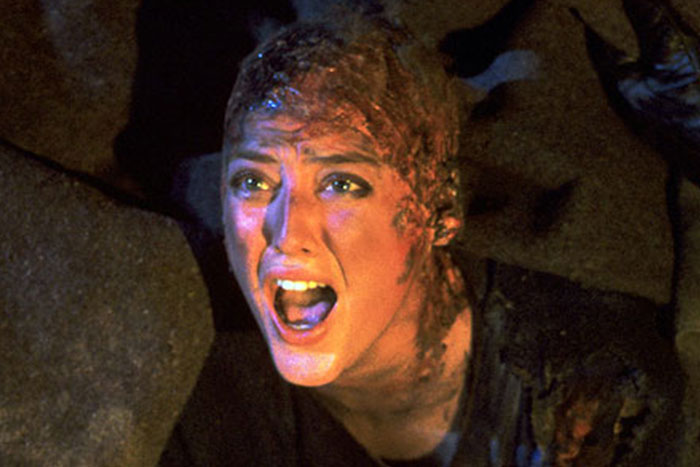 The film shows us the decline of Helen, at the hands of the Candyman.  By the end of the film, Helen is in a situation in which she can not escape. The fire is used almost as a symbolism of Helens cleansing and rebirth. Helen was innocent of all the crimes, however, it was only the fire that could save her. 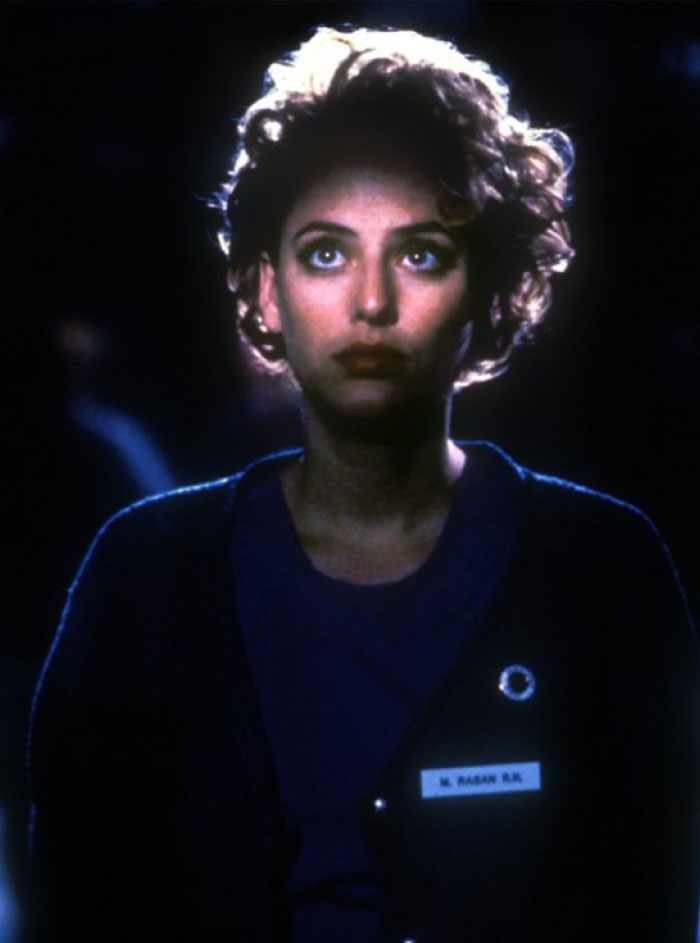 Manslaughter is a legal term for the killing of a human being, in a manner considered by law as less culpable than murder. Arson can sometimes result in mistaken death, in these cases,  manslaughter charges will usually be brought on the arsonist. In Candyman, the residence are ultimately responsible for Helen deaths.

When tabloid reporter Freddy Lounds antagonizes the serial killer known as “the Tooth Fairy” , his inflammatory newspaper articles cause the killer to tale drastic actions. Kidnapping Lounds and gluing him to an old wheelchair, he forces him to retract his allegations, before setting him on fire outside his newspaper’s offices. 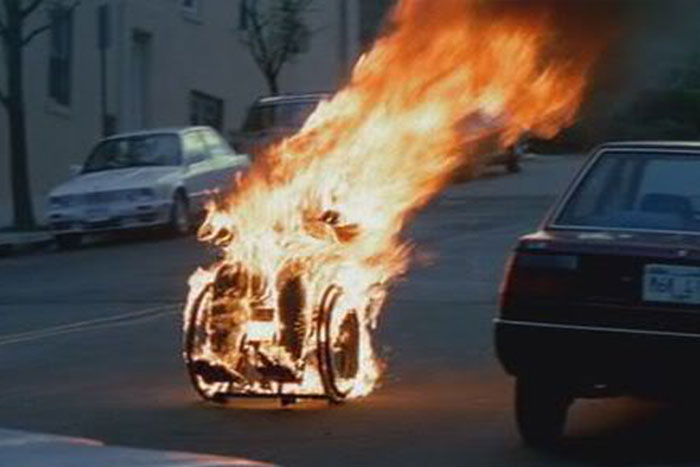 The Tooth Fairies brutal murder of Freddy Lounds was a horrifying warning to the worlds media. Not only was Lounds brutally murdered, but his was stuck to the wheel chair, prevent him from being able to put out the flames. 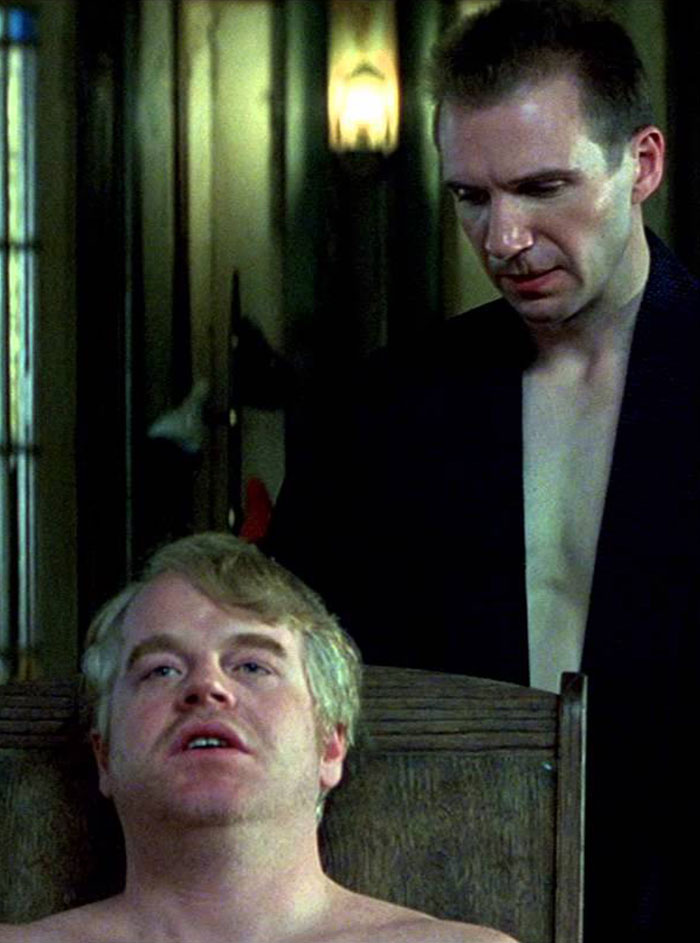 Deliberately causing death through the effects of combustion is one of the terrible ways in which the human race has brutally murder one another. It’s not just murder, but also a warning of the pain and anguish in which the killer can imbue upon their victims. Science would say that death is usually down to carbon monoxide poisoning, however, this does not stop the agonizing pain you would suffer as your body burned.