NECA Toys has released a cool stop-motion recreation of David Kessler’s transformation from the classic horror American Werewolf in London. The animation from D.M Galloway was made to promote Neca’s new release based on the 1981 film. The figures includes the Ultimate Kessler Wolf and the Ultimate Nightmare Demon.

American Werewolf in London is often seen as one of the best werewolf films ever made and tells the tale of American backpacker David Kessler who is a bitten by a werewolf and doomed to transform by the next full moon. Max Landis’ was set to reboot the film a couple of years back but his career stalled  following accusations from several women of emotional and sexual abuse, killing the project before if picked up momentum. Whilst we might not be getting a new film anytime soon, this animation should entertain.

The short film shows off the new Ultimate Nightmare Demon and interchangeable heads that come with it, but also recreates one of the most iconic moment in American Werewolf, were David transforms into the blood thirsty werewolf.

Any hardcore fans of the original film will surely agree that all is missing is the classic Creedence Clearwater Revival song “Bad Moon Rising”.

These two seven-inch figures are available to buy now, so add them as a quick stocking filler for that horror fan in your life.

Will you be picking up these figures? Let us know in the comments below or on Facebook, Twitter, or Instagram! Or head over to our Fans Page to join like minded horror fans. You can also carry on the convo with me personally on Twitter @Lallen_UK 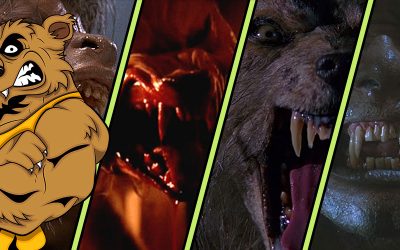 The 13 Best Werewolf Movies of All Time – Scary Lycanthrope Films

The Werewolf may be the least over-used mythical monster in the horror pantheon, despite it’s popularity in the genre. Your are more likely to see a vampire or zombie gracing your screen than you are a werewolf, and this may very well be down to the cost to do so....