Masters of the Universe Movie Arriving 2019

By the power of greyskull, it looks like we may be getting a trip to Eternia soon.

Sony Pictures have just added an unexpected film to its release calendar, announcing the Masters of the Universe is coming to the big screen… again.

Now let’s talk He-man for a second. For the uninitiated, Master of the Universe started life in 1982 as a series of toys that ran until 1988. Each toy came with a mini comic that told the story of Eternia and its heroes and villains.

He-Man was a barbarian from an Eternian tribe. The planet’s inhabitants were dealing with the aftermath of the Great Wars, which devastated the civilizations which once ruled supreme. The wars left behind advanced machinery and weaponry, known only to select people. An early incarnation of the Sorceress of Castle Grayskull gave He-Man some of these weapons, and he set out to defend the secrets of Castle Grayskull from the evil Skeletor.

He-Man possessed one-half of the Power Sword; Skeletor had the second half, and used it as his main weapon. When joined, the two halves of the Power Sword will provide the key to Castle Grayskull (this is why the two figures’ swords could combine into one, when the action figures were initially released). In one early illustrated story, He-Man and Skeletor united their two Power Sword halves to form the true Power Sword, defeating a common enemy. 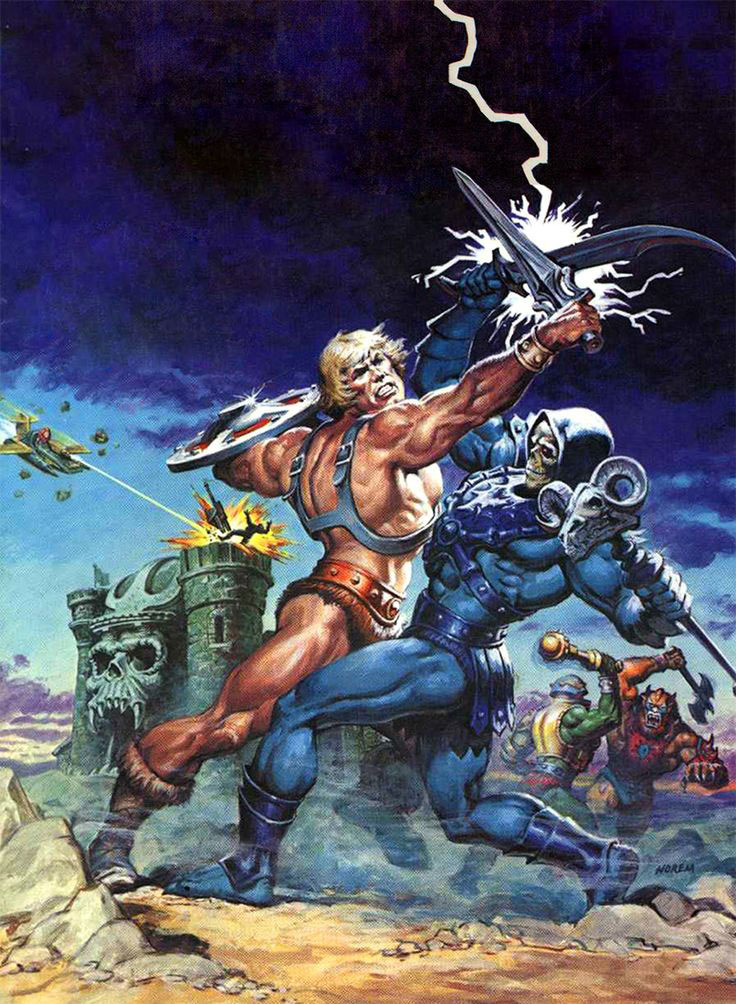 The action figures were hugely popular and it was only a few years after, that an animated TV series was created for the Eternians. Called ‘He-Man and the Masters of the Universe’ the series changed the story some-what to appeal to a wider market. He-Man gained what all great superheroes had, an alter-ego. He-man now had a secret identity as Prince Adam, and only a few people knew his secret double life.

A film was produced in 1987. Called ‘Masters of the Universe’ it featured Dolph Lundgren in the role of He-Man. However, the film was a big flop and fans of the TV series and Action figures were mad at the silly changes made to the film.
Prince Adam was gone, as were many fan favourite characters such as Orko, who was replaced with a character called Gwildor, seemingly for budget purposes. In another crazy move, the film was set almost entirely on earth.

He-Man received an update in 1990 with The New Adventures of He-Man, a sequel of sorts to Master of the Universe , which saw a brand new series of Toys and a companioning TV series

The accompanying storyline in the mini-comics packaged with the figures explained that He-Man had left Eternia and pursued Skeletor into the depths of space, where Skeletor had set his sights on conquering the distant world of Primus (a planet with great technological resources).

He-Man went off the radar for quite a few years, but returned in 2002 with a new toy line was produced and a tie-in TV series.
To tie in with a new line of action figures based upon the original toy line, a new He-Man cartoon series was produced in 2002.

Rumours of a new film have been circulating for years, most recently in 2015 when the film rights to Masters of the Universe moved hands over to Sony, where Producer DeVon Franklin desperately took to twitter to drop production art and logos, hoping to stoke more interest. Then in 2016 , director McG (Terminator Salvation) was attached to direct, but the fires soon dwindled out.

It was only in late march of 2017, that an awesome new advert hit the UK airwave, showing Skeletor dancing through London streets, with He-Man giving him an encouraging cry, with a little help from his sword. Say what you will about advertising, but this live action version certainly got Sony Studio executives excited, as the new film is greenlit, without a director or script.

The Masters of the Universe film is set for release December 18, 2019.