Born into the era of merchandise, and I’ve seen many films and TV series managed to turn out toys and lunchboxes on an unprecedented level. But some nuts are harder to crack and not every film translate well into commodities that you can sell to kids. When the film sensation Ghostbuster came out in 1984, Columbia Pictures desperately wanted to cash in on the films success. Despite producing things such as bed linen, wallpaper and clothes emblazoned with the Ghostbusters logo, the somewhat scarier elements of the film were never going to translate directly into a toy range. With little to no representation on the Christmas wish lists, Columbia looked to their Television department to help plug this gap. The Real Ghostbusters was the perfect solution, and whilst it was produced as an animated television series spinoff, it took off on its own steam and become something bigger than anyone could imagine.

Produced by Columbia Pictures Television (now Sony Pictures Television), DiC Entertainment and Coca-Cola Telecommunications, the show took off from after the events of the film, continuing the adventures of paranormal investigators Dr. Peter Venkman, Dr. Egon Spengler, Dr. Ray Stantz and Winston Zeddemore. The animated show also presented their secretary Janine Melnitz as a main character. The introduction of Slimer, as the Ghostbusters Mascot was a work of genius and gave the show that extra elemental needed for a kids show, the silly comedy relief. He-Man had Orko, Thundercats had Snarf, Ghostbuster adopted Slimer. So popular was the green glutinous blob, that later series of the show even introduced his name into the title, ‘Slimer and the Real Ghostbusters’.

The characters were designed to be caricature’s of the films cast, and even the voice cast were told to not impersonate the films stars. The grey uniforms from the film were replaced with coloured variations and the Ghostbusters HQ, Ecto1 and containment system were all overhauled for the show. Hoping to be more appealing to kids, the shows ghosts and goblins were also changed to make them less intermediating. Whilst in the film, the ghosts were pretty mindless, in The Real Ghostbusters they were often smart, cunning and organised. Many of the bigger “bads” were reoccurring characters and would often re-emerge to cause trouble once again for the Ghostbusters.

The show ran for six years until 1991, and the writing was clever and bold. The series often looked at the Ghostbusters personal lives and how they spent their time between busts, which always led to even more adventures. The show even explored places such as inside the containment system and parallel dimensions. The show greatest achievement was show it integrated itself with the films.  One episodes explored the moment directly after the films climax and even explaining the movie as a film adaption of their adventures. The different coloured uniforms, Slimer’s turn as a good guy and even the Ghostbuster radically different looks form their film counterparts were all acknowledged throughout the series.

The Real Ghostbusters Toy line was created by Kenner in 1986 and ran for five years, ending in 1991. The toys were directly related to the TV series and included all the cast and handful of other favorites. Not many of the shows “ghost” made it to the first figure range, with Slimer and the Stay Puft Marshmallow being the only character from the show. Both villains were more reminiscent of the films portrayal and Slimer was simply named Green Ghost. It’s possible that there were designed before the show, maybe as arrange of toys for the original Ghostbusters. This would explain why they look so little like their cartoon counterparts.

The Ghostbusters themselves were clearly modelled on their cartoon characters, and each figure came with a small ghost for them to catch. Although a welcome extra, these ghosts felt like an afterthought to the ghostbusters themselves, moulded in a single colour and with generic names such as Grabber, Gulper and Chomper. Considering that the Ghostbuster game with a Neutrona Blaster (“Neutrona Wand” or particle thrower) and Proton Pack, it was good to have something to “catch”. The Neutrona Blaster had a curly piece of plastic that represented the proton stream, each character’s stream came in a different colour. By twirling a little switch at the back, you could bring the Blaster to life. Cool Stuff!

A second release brought some much-needed ghost and vehicle action to the range of toys in the spring of 1987. Ect1 was made available, proportion to the correct size for the figures, and was the must have toy for kids of that year. More importantly…lets talk about slime! Ecto-Plasm play gel was introduced and become the bane of every parent (and their carpets) for years to come. The “proof of a ghostly encounter” gel came in a small pot and included a new small ghost inside the gel. This non-toxic gel first appeared in the Masters of the Universe Evil Horde Slime Pit, and whilst it never really hit off for Mattel, The Ecto-Plasm variation by Kenner was a huge hit. Coming in four colours, each with a different ghost, kids were sure to pour this stuff on everything their owned. Three new ghosts were released also, each one could utilise the slime in different ways, giving kids a proper place to put the oozy substance.

Over the next for releases, various different version of the Ghostbusters toys were released, from the most commonly owned Super Fright Features (whose eyes and mouths would pop open in fear) to the Power Pack Heroes. More vehicles were added and for the first time, the Ghostbusters HQ playset was brought to life in toy form. This set was massive and anyone that had one was the envy of the school yard. It came with a pole for the Ghostbusters to slide down, opening doors for Ecto-1 and the ghost containment unit, which opened up for a single small ghost to fit inside. A vent in the roof allowed for Ecto Plasm to be poured down on top of the figures below. The ghosts also improved, growing into fully featured figures, such as Haunted Humans and even a Monsters line-up that featured Dracula and the Wolfman. With transforming features, poking out eyes and various over gimmicks, the ghost were suddenly really fun to play with.

For the bigger fans of the Ghostbusters, a comic series started publication in 1988 by Now Comics, and ran for two volumes, two annuals and one special. A spinoff series that spotlighted the popular Ghostbusters character Slimer was also published for nineteen issues. and sticker book were produced. There was even a sticker book set, that was produced by Panini in 1998 and used many of the most popular stories of the second series. The stickers came in your standard blind pack and would go into the book to complete the stories. Each pack came with one foil sticker which were always the most wanted of trading pieces.

The Real Ghostbuster started life a s simple way of cashing in on a popular film, but eventually become a much larger beast that spawned every piece of merchandise you could imagine. Growing up in 80s and 90s, there was not one kid in my school that did not own something belonging to The Real Ghostbuster and thanks to it’s prime time slots on Kids TV, the show become wildly more popular than it’s film source. The Real Ghostbuster were one of my most loved cartoons and toys as a young boy growing up, and they still give me great joy in the memories I had watching and playing with them. I never did finish the sticker album. One of these days I’ll pull it out of the attic and see what’s missing, maybe someone out there still has a few unopened packs?

There’s something a foot in the fridge. 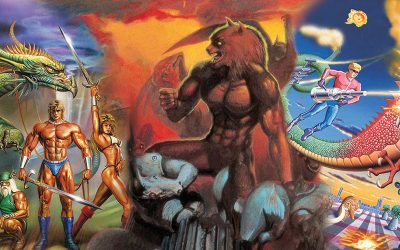 “Hey Horror Fans – “Who Ya Gonna Call” I loved watching The Real Ghostbusters on television. There wasn’t enough shows with demons and monster running around causing havoc. And who did not want a Proton Pack growing up during the 80s? This has been a great trip down memory lane!

Ps….That slime really did get everywhere! .