Roaming the isle of your local supermarkets during October, you’ll no doubt spot an entire isle dedicated to the spooky delights of Halloween. Amongst foam rubber costumes and latex masks, you’ll find an elaborate assortment of decorations and displays to catch even the youngest of Horror fans eyes. But back in the day, shopping for Halloween masks meant choosing from a bunch of thin vacuum formed plastic masks that were held on by elastic and would crack if you so much as sneezed whilst wearing it. Splattered with colour and sometimes accommodated by a cheaply made costumed that would go on top of your clothes, these plastic pleasures were the hype of Halloween and it’s right here that we find ourselves Remembering – The Plastic Halloween Masks of the 1980s.

Whilst you might be tempted to turn you nose up at these flimsy disguises, for those of us that had busy parents with no time to create custom costumes, we were stuck picking from the range of masks on display. That’s not to say that they were not creative, far from it.

The rise of pop culture continued to dictate Halloween trends throughout the 70s and 80s, but surprisingly, traditional Halloween costumes were returning to popularity too! So where beloved superheroes and TV characters lined the shelves, witches and vampires were also on display. But ultimate, shelves were mostly packed with familiar faces from film and TV.  We were in infancy of child marketing, and every brand that could pop out a Halloween costume were doing so and those were not were licencing to Ben Cooper.

Ben Cooper, Inc. were the most prominent distributor of Halloween costumes from the late 1930s to the late 1980s, but by the 80s they had discovered the delights of licenced produces, and so the like of He-Man, She-Ra and Star Wars filled shelves. Even obscure shows such as Mork and Mindy, The Munsters and Dukes of Hazzard. In 1979, Coopers even managed to licence a costume based on an R-rated motion picture, the creature from the film Alien.

Cooper’s items did come at a price though, and these elaborate boxed sets failed to shift as many units as single mask in certain markets. In the U.K, people were more excited about ‘Guy Fawkes Night’ that fell on November the 5th, a traditional event that celebrates the Gunpowder Plot and the near successful assassination of King James I. This is why U.K. shelves were barely stocked for a celebration that was deemed an American affair. For U.K. Kids such as myself, we would have to make do with cheap oil face-paints and creative parents to rustle up cool looking costumes. But don’t worry, us stiff upper lipped Brits came around in the 90s, as commercialism won the day and U.K. shops began to understand how profitable Halloween could be.

As the 90’s slipped round, the popularity of the plastic masks begun to Wayne, as much more elaborate latex and foam rubber design begin to circulate. Full head Masks and stunningly designed costumes really hammered the nail in the coffin for the cheaply made plastic disguises, and companies such as Ben Coopers disappeared in the new decade. Funnily enough, Ben Cooper, Inc. filed for bankruptcy October 30th, 1991, just one year into the 90s and a day away from the celebration that made them a household name. Trick or Treat… 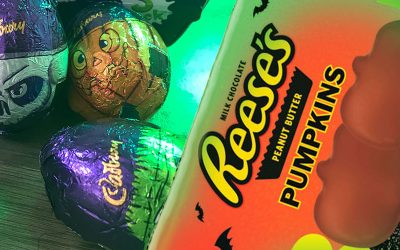 “Hello Horror Fans – I love Halloween, it’s the only time of year I DON’T have to wear a mask to pop down to the shops to pick up some milk. Do you remember wearing this sharp edged monsters? You might say they were a CUT above the rest, but I don’t want to TEAR down you’re precious childhood memories…  haha