The Company of Wolves

The Company of Wolves is a film about dreams , stories and werewolves. Based on a novel and a screenplay by Angela Carter, the film is a loose interpretation of Little Red Riding Hood and the awakening of sexuality. Whilst at first it may seem like a precautionary tale for teens, Wolves is a dark, disturbing and graphic tale that borders on surrealism. Through deep dark woods and fairytale exposition, this film is cautionary fable of lust, trust and the importance of vigilance, especially against men whose eyebrows meet in the middle. Wolves are not the only thing wandering the darkness, here there be spoilers!

The films starts in present day , with a young girl named Rosaleen (Sarah Patterson) who dreams that she is living in a fairytale forest. Her sister has just been killed by wolves and she stays with her grandmother , whilst her parents grieve.  Granny (Angela Lansbury) gives Rosaleen some important lessons, in the form of disturbing fairy tales, as she knits the young girl a bright red shawl. Each story twists into a fable of werewolves and death. With disappearing husbands and cursed woodlands swallowing people up, the tales disturb the girl, but intrigue her all the same. Grannies superstitious stories play on the young girls minds as she returns to her family, especially her ominous warning, to beware men whose eyebrows meet in the middle. It is on her return that she realises that these cautionary tales may have merit, as the local people discover a wolf has been attacking the town cattle. Upon killing the beast and taking a paw as a trophy, Rosaleen’s father discovers that the paw has become a hand.

Most of the story seem to take place in or around 19th century,  either in a little village or the wild, dark forest that surrounds it. And it’s here where the film really becomes something beautiful. The films script does not commit itself to any one given path, instead it murkies the water of it’s main plot, but what really strengthens this film is it’s sets. The gloomy and gothic styled woodlands are a glorious thing to behold. Twisted branches and thorny bushes, all sitting on top of moss covered rocks and woodland floor. It’s clearly a set, but one hell of a good one. it reminds me of the glitter infused woodland of the Ridley Scott fantasy film, Legend. It’s a dark and foreboding place and certainly a place you don’t want to be alone in. And yet, our feisty young protagonist finds herself here on more than one occasion, against all the warnings.

There are several different werewolves portrayed through out the film, each one having a slightly different transformation, but the result is the usually the same, man becomes wolf. And that is exactly what you get here, large grey wolves , with glowing white eyes. In one of the stories Granny tell Rosaleen, a husband who has been missing for years, returns to find his wife re-married and with several children. Enraged by her betrayal, he begins to rip his skin off, revealing muscle underneath. The face shifts, with the nose protruding forward becoming that of a wolf. It’s not a bloody scene, but still a creepy but artfully shot scenes. In the films conclusion, we see a wolfs muzzle grow out from a mans mouth, the mans skin ripping to reveal fur underneath. It’s almost like the wolf is wearing a mans skin. The transformations are pretty awesome and definitely some of the better werewolf moments in film. They are also integral to the film’s message, that men are wolves and wolves are men. Neither are to be trusted!

The film has  a very clever narrative, if not a little simplistic at times, it is well structured. Each of the stories told has it’s own meaning and lesson. The film is also littered with strange little details and odd moments that constantly keep you on your toes. It’s a film, that if anything else, demands your full attention. Although, you can’t always look into meaning for each detail. Even Neil Jordan has admits on DVD commentary track, that the film has “some deeply illogical things” that are not symbolic of anything, but just moments that remind us that this is a dream. However , there are plenty of symbolisms there, mostly hinting towards Rosaleen’s awaking into woman hood and her fight against it. In the end, Rosaleen ignores all the warnings of her protective Grandmother and finally gives herself over to adulthood, becoming a wolf herself. Though this symbolism can be interpreted in many different ways ( I’d be very interested in hearing what you have to say, drop a message in the comments at the bottom of the page!) the corruption of youth is clear, represented by that of a man, who is a wolf!

The films has a wonderfully haunting score by George Fenton, with a orchestra of strings and brass that builds from wickedly dark to triumphantly dramatic. The music is integral in keeping the films atmosphere and tension building through out. It’s classical flow, set against the beautiful sets, makes for a uneasy journey into an unusual fantasy world. From the dark woods to the relative safety of Rosaleen’s bedroom, the score will haunt you through out.

The Company of Wolves, is a dark and gothic masterpiece, sadly overlooked for more graphic werewolf films such as American Werewolf in London, or the Howling. Where as these films used gore and violence to sell the films, The Company of Wolves uses it’s symbolism and atmosphere to build an haunting and well concepted piece. It does have it’s flaws, and it can be confusing at times, but with artful direction, amazing cast and haunting soundtrack, it’s one hell of a food film.

The importance of these bookends, set in modern day are still a little bit of a mystery to me, as i believed the film did a beautiful job of painting the films message of sexual awaking. However, as the film closes, in the real world, a wolf come crashing into Rosaleen real bedroom window and she awakes screaming. As she had faced becoming an adult in her dreams, the wolfs entrance represents her awakening in the real world. She is becoming, or maybe has become a woman, and it’s terrifying!

“Little girls, this seems to say,

Never stop upon your way,

No-one knows how it will end,

As you’re pretty, so be wise,

Wolves may lurk in every guise,

Now as then, ’tis simple truth, 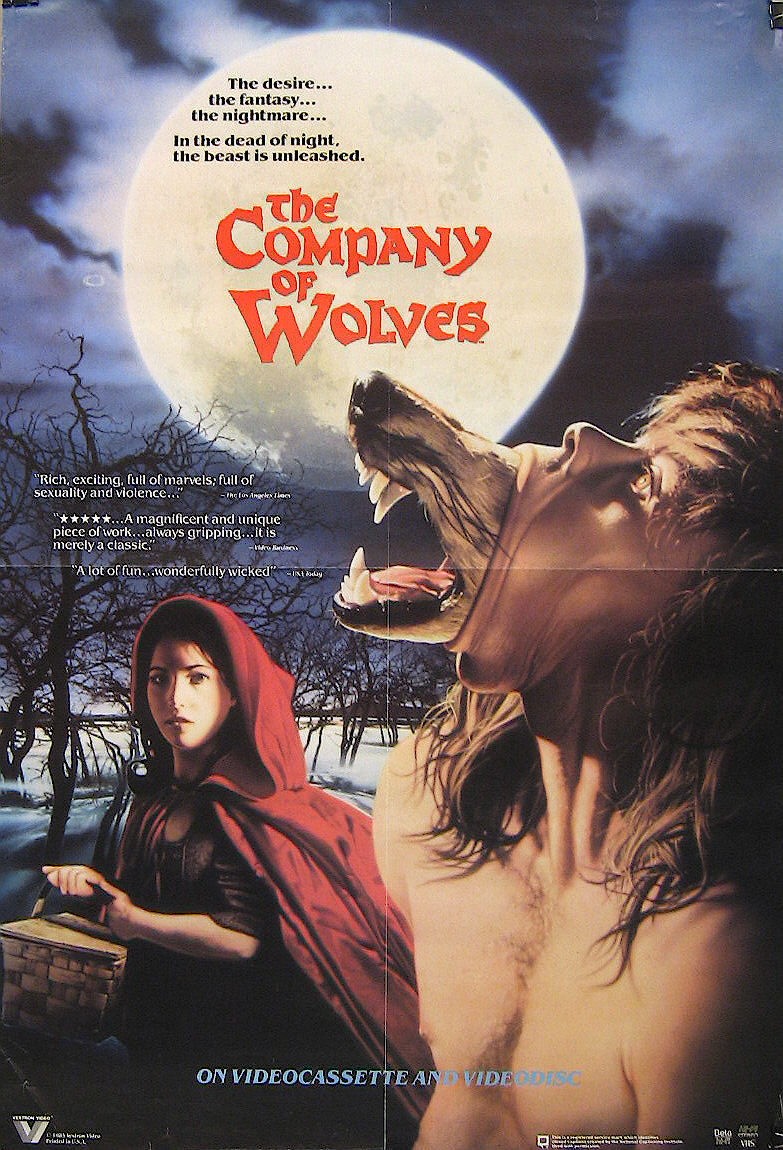 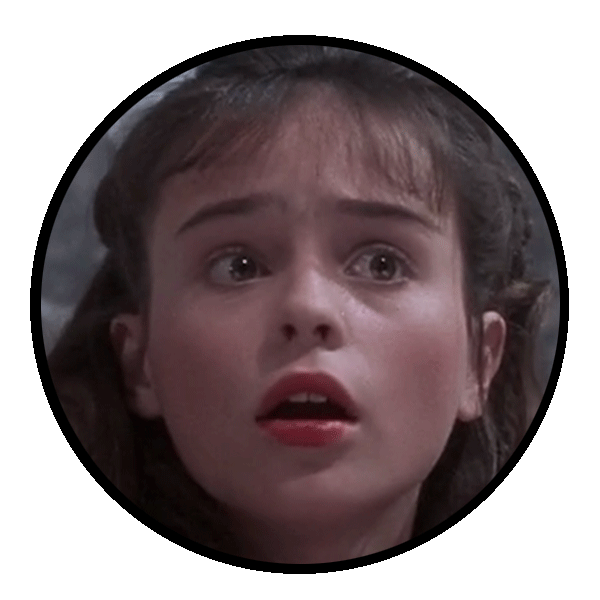 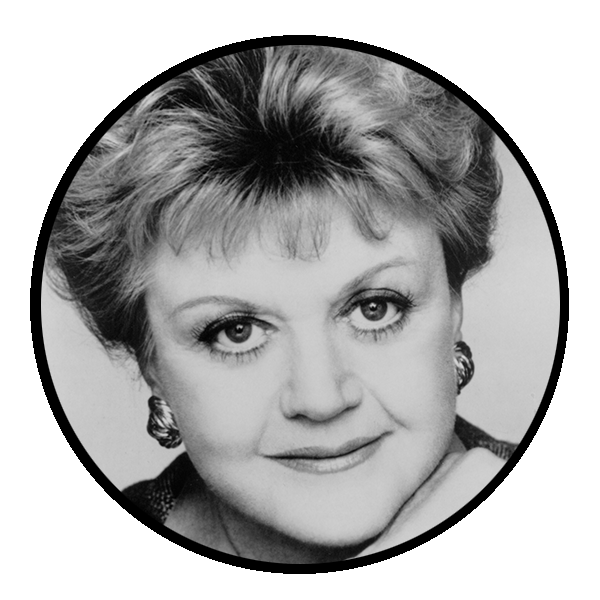 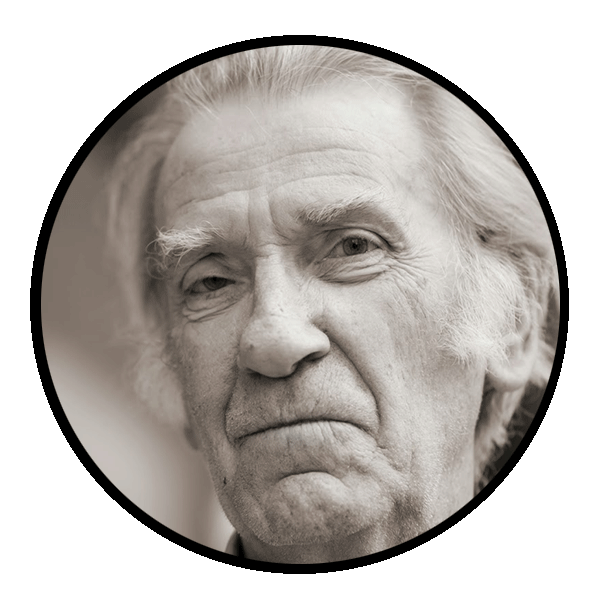