The 15 Best Witches in Film

The 15 Best Witches in Film

It was in 1563, it was made a capital offence to perfume witchcraft, and even before that it was deemed heresy by the Pope Innocent VIII in 1484. And so it was the between 1484 and 1700, over 200,000 witches were tortured, burned or hanged in western Europe. These killings have preyed upon our minds for hundreds of years and even in modern culture, we still fear this phenomenon that claimed hundreds of thousands of lives.  Witches may not be as popular as werewolves of vampires, but they certainly make a great source material for filmmakers. We look at 15 of the best witch movies.

Haxan is a silent horror film that exposes the horrors of superstition and hysteria behind witch-hunts. The films a strange little curiosity that starts life as a documentary-style affair looking at witchcraft, before surreally twisting into a dark and horrifying thriller, filled with Grave robbing, torture and a satanic Sabbath that any witch would be proud off.

The finest example of witches comes in the form of a little musical number based on a book by L. Frank Baum. The Wizard of Oz introduces us to the wonderful world of OZ through the eyes of a young Kansas farm girl called Dorothy, who is whisked away to this magical land through a devastating tornado. Oz has four witches, and Dorothy crashes her house on top of one them, the Wicked Witch of the East, which royally pisses of the Wicked Witch of the West.

The Wicked Witch of the West is the main antagonist in The Wizard of Oz. Green-skinned, and dressed entirely in black and doting a classic witches hat and broomstick, she’s personifies what we view as a classic witch. She cast spells, commands minions and is generally an angry and vindictive creature. Being the most powerful witches of the four, she does have just one small Achilles heel, water! When Dorothy does her with a bucket of H2O, the green skinned nasty just melts away into a steaming puddle of goo.

Night of the Eagle has a much better alternate title, “Burn, Witch, Burn” which I think is more telling. The film sees a sceptical college professor discover that his wife has been practicing magic for year and he forces her to stop by destroying her occult paraphernalia. Almost immediately, things start to go wrong for the couple resulting in a series of devastating events. The film incorporates the ‘everyday’ use of charms and powers, alongside black magic styled curses and twists.

The Witches is a horror thriller made by Made by Hammer Films. Based on a novel by Norah Loft, called The Devil’s Own, the film stars Joan Fontaine, playing a young school teacher who stumble upon an underground witches’ coven. It might be quite dated, but it’s an amazingly powerful film with startling visuals and a strong sense of conspiracy and isolation throughout. The Witches themselves have more in common with occultism than traditionally witchcraft, but the finales strange satanic ceremony is an amazing little corner of cinema and a must watch for any horror fan.

The films surprise revelation of the high witch is sadly ruined in recent years, with actress Kay Walsh plastered all over DVD covers.

Suspiria is a 1977 Italian horror film directed by horror king, Dario Argento. Widely seen as one of Argento’s greatest films, Suspiria is a dark and graphic film about a coven of witches set in a prominent dance school in Germany. Jessica Harper stars as an American student who starts to suspect something evil is lurking within the school, as her fellow students are viciously murdered.

The main protagonist and High Witch is Helena Markos, a cruel and demonic woman. Despite little screen time, Markos presence is felt throughout and her powers are indisputable as she resurrects the dead to do her bidding. Unlike other films, in Suspiria, the Coven are bound to the High Witch and when Markos is dispatched, the rest of the witches asphyxiate and the academy crumbles and burns.

Excalibur is a 1981 film about the rise and fall of King Arthur. One of the more notable characters is a sorcerer known as merlin, who apprentice Morgana turns against him and Arthur. Morgana steals Merlin’s magic and becomes a powerful witch. She uses magic to confuse and seduce, even casting invulnerability on armor.

With a great cast and dark humour, Witches of Eastwick is a perfect slice of urban Witchcraft. based upon a novel by John Updike,  Alex (Cher), Sukie (Michelle Pfeiffer), and Jane (Susan Sarandon) — fantasize about their ideal male. The very next day, Satan turns up, disguised as mysterious stranger Darrell Van Horn (Jack Nicholson) One by one, Van Horne seduces each of the women and they discover a dark power.

With curses, spells and even a little voodoo thrown in for free, the film portrays witchcraft as being mischievous, cruel and exhilarating.

The Warlock is a great example of witchcraft and witches, filled with curses, magic and murder. The Warlock (Julian Sands) is sent through time by the devil, to bring together the pages of an ancient text that could undo creation itself. Throughout the film, we see many different example of power, from the creation of potions (rendered from human fat), to aging curses and the ability to create fire from air. The film also visits the many trapping of a witch, like copper and salt, as well as seeing the Warlock interacting with the Devil himself. This has always been at the heart of the mythology of witches, that they converse with the Devil. The Warlock manages to depict the evils of witchcraft in a chilling and well-cast film.

Based on a children’s novel by Roald Dahl, The Witches fantasises about a world where witches masquerade as ordinary women. The story sees a boy and his grandmother uncover a plot by the Grand High Witch to turn all children into mice. The film portrays witches as demonic creatures that have a genocidal hatred for children and the Grand High Witch as a hunched back monstrosity with a huge warty chin and sharp claws.
The Witches was produced by The Jim Henson Company and was Jim Henson very last project he worked on before he passed away. Whilst it was mostly faithful to the book, Author Dahl, hated the alternate happy ending that director Nicolas Roeg had shot. The book ends with a rather melancholy ending where the young boy (named Luke in the film) contemplates his own death as a mouse. “I’ll be a very old mouse and you’ll be a very old grandmother and soon after that we’ll both die together”. Chilling stuff!!

Based in Salem, Massachusetts, three witch sisters are resurrected after being burned at the steak three centuries previous. Hocus Pocus is a Halloween fantasy-comedy film starring Bette Midler, Kathy Najimy and Sarah Jessica Parker as the Sanderson sisters. The witches plot to out the souls of all of Salem’s children, other wise they will turn to stone at sunrise. The Witches fly on brooms, resurrected the dead and also place curses.

Set in Los Angeles, the Craft turned witchcraft into a high school drama as a quartet of teenyboppers engage in necromancy to improve their lives.  Robin Tunney plays Sarah, a troubled teenager who joins a coven of young witches who begin to delve into dark and mischievous magic. The films campy and conventional approach to witchcraft inspired a generation of young women and would be witches. The films makers hired Wicca consultant Pat Devin, to help with the script. In fact, the spells used in the film can all be found in common Wicca books, making The Craft one of the more realistic interpretation of real Witchcraft.

Despite a distinct lack of screen time, The Blair Witch has embedded herself into our collective mind as one of the more malevolent on screen Witches. The film tells the fictional story of three student filmmakers who hike in the Black Hills near Burkittsville, Maryland to film a documentary about a local legend known as the Blair Witch. The film depicts the Blair Witch as being the spirit of an alleged child killer Elly Kedward. Kedward was found guilty of witchcraft and banished during a particularly harsh winter. She was presumed dead but rumour is that she was murdered by the townsfolk. The film hints that the Blair Witch hunted and murdered the three students, all though we never actually see her.

When four kids find themselves in the magical world of Narnia, they find themselves teamed with a mystical Lion to take on a wicked witch. Jadis, the White Witch froze Narnia in a hundred year winter. She is served by many different creatures including werewolves and spectres, all bent to her evil will to rule. She is extremely powerful and her wand is capable of turning people to stone. The petrified remains of her enemies decorate the halls of her castle. She is extraordinarily beautiful, tall and pale, as well as being arrogant and cruel.

2007 – Harry Potter and the Order of the Phoenix

The Harry Potter universe is filled with Witches and Wizards, but in keeping with our theme, we look at the cruellest and evil witch portrayed in the films, Bellatrix Lestrange. Bellatrix escaped Azkaban prison and re-joined Voldemort during Harry’s fifth school year. Throughout the film, she is witness killing two fan favourite characters Sirius Black and Dobbie, marking her as one of the more hated characters in the series.

The Witch is a historical period supernatural horror film written and directed by Robert Eggers. The films concept of witchcraft is more representative than physical, with imagery and animals used in place of outright magic. We do see several witches throughout the film, set in New England 1630, each one represented as a different effigy of a witch. We witness an old Hag murder and eat a child and a beautiful young witch seducing a young boy. Amongst this is the dark undertones of an evil presence that is haunting an English farmer and his family. The films more visuals than concept, but the overall feeling is melancholy and dark. 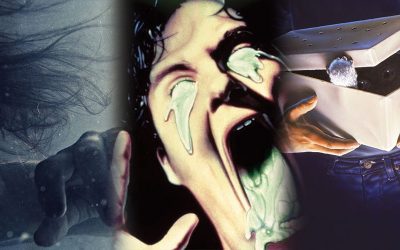 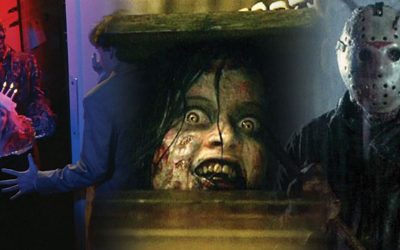 10 Trailer Scenes Cut From the Film