If you want someone dead, there’s no better way than to remove their head. Decapitation, also known as beheading, is the total separation of the head from the body. Horror creators often use decapitation as way of quickly killing off characters. As it’s an invariably fatal death, it’s the perfect way to dispatch someone without any doubt to their fate.

Here is a list of some of the most horrifying decapitations in genre cinema, looking at the moments that chilled us to the bone. Watch your head! Here are 10 Shocking film Decapitations – Beheadings in Horror.

The Omen is a powerful film about the son of the Devil, who is adopted into a politically aligned family. David Warner plays Keith Jennings, a photographer investigating Damien after he starts to spots strange shadows in his photos, follow a series of strange deaths. His investigation comes to a violent end, when he is beheaded by a sheet of glass following a freak accident. The effects shot was one of the first graphic in-camera beheadings caught on camera, and still packs a punch.

There’s nothing more satisfying than witnessing a villain get their comeuppance, especially when it’s done in violent and visceral manner. Such is the fate of one of the characters of George Remoero’s Day of the Dead.

Tom Savini provided the special effects for the film, and won the 1985 Saturn Award for Best Makeup Effects for his work on the Romero’s Day of the Dead. So it’s no surprise that the film contains some of most shocking practical effects in cinema. In one hair raising moment, Private Torez is finally laid to rest when his head is ripped off by a hoard of hungry zombies.

No matter how far flung from the video games, Paul W. S. Anderson’s Resident Evil gave us an amazing action packed series of films, filled with zombies, monsters and mutating villains. The first film introduced many elements that paved way for the films future films, but one of the most epic moments came when the films characters were introduced to the red queen.

In a horrific sequence, a group of commandos are faced against the Red Queens laser defense, which kills all trapped inside the chamber, including a gruesome beheading.

The Final Destination films have survived on a thin premise and a humungous amount of gory deaths for five films. But if your looking for shock beheadings, the first film has you covered, as Billy Hitchcock is decapitated by a flying piece of shrapnel on a train track.

Hereditary is a dark and disturbing film that twist from a psychological horror to a ocultish nightmare. But whilst the scares are pretty projected throughout, with run of the mills chills and thrill, one of the most impactful moment comes completely out of the blue. Suffering from anaphylactic shock, young Charlie sticks her head out of the car window, on her way to hospital, she is decapitated by a telephone pole. Ouch!

Mirrors 2 is a direct-to-video sequel which failed to have as much as impact as it’s 2008 original. However, what it lacked in story, it certainly made it up with the gore. One scene in particular really puts the “head” in showerhead, as a freak accident ends in a bloody mess. Jenna is thrown through glass doors by her freaky ghost reflection, and a shard of glass decapitates her in a fountain of claret. It’s a gruesome scene that ultimately deserved a better film.

After six films, you would have thought that the Child’s Play films would have dropped in quality, but Curse of Chucky managed to prove that Chucky still has it where it counts, especially when it comes to the creativity of the kills. One of the films most shocking moments comes in the form of a nasty car accident, that sees Father Frank trapped inside his vehicle. As rescue workers try to free him from the wreck, his head is severed from his body.

Despite a tediously drab plot, the remake of the 1953 film House of Wax, manages to deliver an impressive amount of gore. It’s not just blood and guts though, the films also has some impressive cinematography, and by combining the two, House of Wax delivers high quality horror. The best example of this comes when Dalton is ambushed and decapitated by Vincent. Although the beheading happens just off screen, the clever camera angle and reveal is dramatically violent and shocking.

It’s probably no surprise to see Peter Jackson’s Dead Alive/Brain Dead on a list of gory film moments. The film about New Zealand zombies ultimately culminates in the walking dead attacking the patrons of a house party. The following carnage is bloody and hilarious in equal doses. The beheading happens as a zombie party goer ascends upon a shed, only to be decapitated by a pair of garden shears. This gory beheading is ultimately played out for laughs, with the severed noggin being knocked around like a hockey puck, just increasing the already amble amount of claret on the floor. Blimey.. someone fetch a mop!

Halloween H20 was the first reboot of the Halloween series which saw Jamie Lee Curtis return as Laurie Strode. When Michael Myers tracks her down, Laurie takes matters into her own hands and beheads Michael in cold blood.

What makes this scene so unforgettable, is how out of the blue this violence comes from. Laurie has always been quite reserved, and whilst we have seen a mature side to her in H20, this sudden murderous rage explodes on screen, to the chilling sound of the Halloween theme. 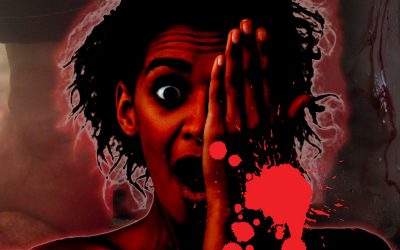 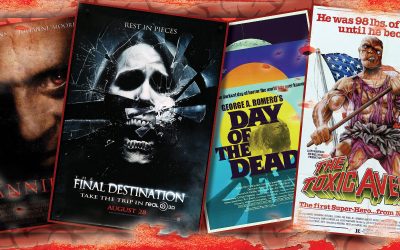 “Hello Horror Fans – I’ve always been a “chip off the old BLOCK”, but I’ve never lost my HEAD in a GRIM situation. Whilst these poor fools never got AHEAD of the Villain, they surely did leave a big IMPRESSION. What did you think of our gruesome list folks? Why not let us know in the comments below? Until next time Goblins…

The most horrifying decapitation of all time was in Escaping Peril.
SPOILERS Unfortunately it was a false alarm, the biggest heartattack I’ve had in any book ever, and it meant nothing.