The Many Ghosts of ‘A Christmas Carol’ – Past

The Ghost Of Christmas Past

“I told you these were shadows of the things that have been!”

The first of the three ghost, foretold by Jacob Marley, was the Ghost of Christmas Past. When the bell tolled one, the spirit appeared to Scrooge, as a man or a child, to which one he could not tell.

“It was a strange figure — like a child: yet not so like a child as like an old man, viewed through some supernatural medium, which gave him the appearance of having receded from the view, and being diminished to a child’s proportions.”

The spirit wore a dress, trimmed with summer flowers and it held a sprig of holy in one hand and a large extinguisher cap in the other, for the top of it’s head was a spring of light, like fire.

Ann Rutherford plays the Ghost of Christmas Past in the 1938 version of the film. Being the most difficult to portray, due to the books  androgynous and ageless description, this early version of the film shows the ghost as a young woman wearing a long white dress. Scrooge describes a bright light that hurts his eyes, but there is nothing more than a hat with a sparkly star on top. The ghost flies with Scrooge when they approach the window, something that dies not happen in the book. The encounter ends when Scrooge, frustrated with the sights shown to him, flings the ghosts dress over her head.

The Ghost of Christmas Past is played by Michael Dolan in the 1951 film. Appearing as an old man in a white robe, decorated with flowers, this version of the ghost has neither holy or cap, and there are no bright lights or flames. The film spends over 20 minutes with this ghost, but he barely appears and exist more as a voice over than an on screen presence.

The spirit appears to Scrooge, in the 1984 film version, as a shining shimmering specter played by Angela Pleasence. She appears as a woman in a frilly white toga and bananarama hair, with an ethereal voice. She holds holly in one hand and an oversized metal cap floats under the other. when Scrooge places the cap upon her head, it’s almost like a scene form a horror movie. With a grimace upon his face more akin to man holding someone’s head underwater, rather than extinguishing the bright light that emanates from the spirit.

David Johansen plays the cigar smoking, cab driving, Ghost of Christmas Past in the 1988 film version, Scrooged. Unlike the other ghosts in this list, this spirit is an unkempt, dirty looking cab driver, with a terrible oral routine. His vehicle is the vessel used to transport Frank back into the past, with the cocky and rude ghost at the helm.

The Muppet’s Christmas Carol created a unique creation for the Ghost of Christmas Past. Voiced by Jessica Fox, this spook appears to Scrooge as a young girl. The small spirit, is an ethereal and floating being with a doll like complexion and a soft child voice. In this family friendly version of the tale, there is no mention of a cap and certainly no extinguishing of the bright light that emanates from the specter. Like in the 1938 version of the tale, the Ghost of Christmas Past flies with Scrooge on their first trip into the past.

Joel Grey plays the pomp and shining Ghost of Christmas Past in the 1999 film adaption of the book. Wrapped in a white suite and gold belt, this spirit wears holy round it’s neck a silk-like cloak upon it’s shoulders. This spirit is a effeminate man, with a glowing aura and soft spoken voice. He appears to Scrooge with a large fire cap on it’s shoulders, the same cap which the miser uses to extinguish the ghost, by forcing it over the spirits head, at their journeys end. 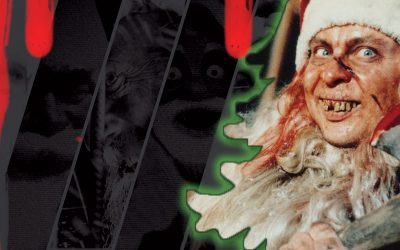 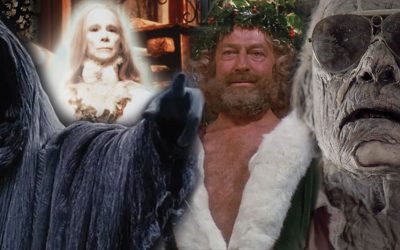 The Many Ghosts of ‘A Christmas Carol’ – Scrooge

“Ho Ho Ho Merry Humbug fellow Horror Fans. There’s more from ‘The Many Ghosts of a Christmas Carol’ on the next page. Check out the buttons above to navigate. The past can sometimes come back to haunt us, do you think that this saying might have sprung from this classic tale? Let us know in the comments below.