Ghostbusters: Afterlife should be hitting out screen this year, and many fans are still wondering in what capacity the old cast will be appearing. For Bill Murray, probably one of the only original cast reluctant to step back into his role, it looks like he’s had a small but tough role as he has described his experience as being “physically painful”.

“We were just in it for a little while, but it was physically painful”

Chatting with NME, he spoke about his experience working with Jason Reitman, son of Ghostbusters director Ivan Reitman, and about his time filming.

“But he had a really, really wonderful idea that he wrote with another wonderful guy that I got to work with, Gil Kenan, who made City Of Ember. The two of them wrote a Ghostbusters movie that really brings it back to life. It really has the feel of the first one, more than the second one or the girls’ one. It has a different feel than two out of four.”

Murray certainly feels that the new film is much closer to the original than any of the other films. However, shooting was tough on the 70 year-old actor.

“It was hard. It was really hard. That’s why I think it’s gonna be good. We were just in it for a little while, but it was physically painful. Wearing those packs is extremely uncomfortable. We had batteries the size of batteries. They now have batteries the size of earrings. It’s still a really heavy thing to wear, all the time.

“The special effects in this one are a lot of wind and dirt in your face, and there was a lot of going down and getting back up. I was like, ‘What is this? What am I doing? These are like Bulgarian deadlifts, or a Russian kettlebell, getting up and down with this thing on my back.’ It was very uncomfortable.”

“Usually, when something has a very high misery quotient, something comes of that and some quality is produced that, if you can capture it and project it, comes on the screen and affects you. I think it comes out sometime in the fall. They’ve delayed it for a year or a year and a half, but I’m glad they did. It will be worth seeing.”

For anyone hoping for a massive role for the original cast, it certainly does not sound like it will be a massive role, but we will be seeing the old crew back in uniform for one last bust. 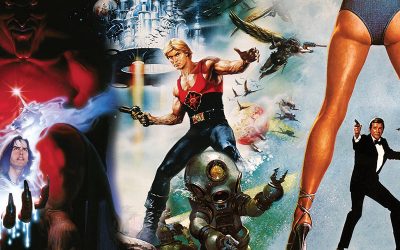