The Hottest Nude Vampire Films Ever!

The Hottest Nude Vampire Films Ever!

As much as you may think that Bram Stoker gave birth to the modern vampire, it was actually a doctor named John William Polidori that is credited with the first published modern vampire story. In 1819, introducing us to our very first blood sucking aristocratic fiend. Up until then, Vampires had been nothing more than bloated corpse that people feared had risen form the grave. Polidori story was so popular, that he completely changed the face of vampires.

It was in 1872 that vampires become sexy, when Irish writer J. Sheridan Le Fanu wrote a vampire novel called Carmilla, whose lesbian exploits were shrouded in metaphor and mystery. Whilst Dracula was one of the biggest influences on the vampire mythos, it was Carmilla that took 20th century European liberalism by storm.

The lesbian vampire sub-genre, was a huge thing during the 70’s, and filmmakers were saturating the market with exploitive films for a primarily male audience’s titillation, many based on Carmilla.  Using the female form as tool to entice people into cinemas was a common practice during this period of cinema. Sexual desire was a key selling point for gothic horror.

However, in modern cinema, nudity and sex are part and parcel of the experience, albeit in a fairer manner, where your just a s likely to see naked men as you are women.  Being more liberal these days, it’s easier to look back on these films and enjoy them without a lingering sense of guilt. They are often artier then pornographic, and also bloody and violent to boot. With that said, we look at some of the finest examples of nude vampire films, some of which you may never have heard of before? They are dead, hot and naked, here are The Hottest Nude Vampire Films Ever!

Following the exploits of two female vampires, starring a rather stunning looking sally Faulkner. this Hammer-esq styled gothic horror is light on story and heavy on naked girls chowing down on unsuspecting horny men. This controversial cult classic was butchered repeatedly by censors due to its sultry scenes of sex. Whilst it’s openly a very misogynistic, the film actually paints a pretty bleak picture of the films men too. Like kids to a white van with FREE CANDY plastered on the side, the men-folk are swayed up to the girls massive estate with the most flimsiest of propositions, where they find themselves pinned down and feasted on by the two girls.

Murray Brown provides the eye-candy for the ladies, and by eye-candy I mean a 70s dad bod, which he gets it out at every opportunity. If slightly overweight guy in his 40s does it for you, you’ll be thrilled. On the other hand (or chest) if you love buxom bosoms covered in blood, this film will surely satisfy you.

Requiem For A Vampire is the fourth feature from cult horror director Jean Rollin, once again showing off his weird fascination for young female double-acts, vampires and freaky ass clowns. Requiem’s nudity is more rampant here, with full frontals and savage sexual scenes pushing the boundaries of film and pornography, and Rollin knew just how controversial he was being. A scene involving Marie-Pierre Castel being whipped by Michelle was shot twice, one with clothes and one without, so that more sensitive audiences could still enjoy this lovely little torture scene.

Whilst the film contains more bush than 43rd presidential cabinet, it’s minimal plot and pseudo-artistic imagery is strangely entertaining beyond its superficial nudity. Filled with wind swept cemeteries, beautiful woman and neon drenched sets, it’s a movie that will stick with you days after watching.

A beautiful young bride marries into a family with a dark secret and quickly becomes haunted by dreams of a mysterious woman. The Blood-Spattered Bride is a 70s horror and sexploitation film that was brutally cut for its American release but it’s original cut is a wonderful psychosexual journey into the mind.

The film is filled with lurid hallucinations and dreams, which constantly have you second guessing the movies next move. It’s filled with haunting music, plenty of nudity and a good amount of the old red stuff to keep you glued to the screen.

The film sees a wealthy hedonist discover that his scientist father, is carrying out experiments to unlock the secret of immortality. There’s barely any dialogue, the story’s flimsy at best, and it’s probably a film for die-hard vampire fanatics, but damn if it doesn’t have some extraordinarily beautiful women, in their birthday suits, cavorting in front of the camera. It’s hot stuff!

Director Harry Kumel was not worried about delivering shocks and gore but concentrated more on making a more artsy-fartsy film, with a deeper moral compass. The movie explores the vows of marriage, putting them to the test against outside forces of sensuality, sexuality and bloodlust. It’s an odd mix of a sleazy B movie and a serious vampire film, but by falling into the sub-genre of Lesbian Vampire films, it sullies it’s waters in blood and boobs, as the cast just can’t seem to keep their kit clean…or on!

A lot of Vampire films have a weird fascination with innocence and virginity, with this purity of sexuality being a key element of the films plot. Here in Embrace of the Vampire, an 18-year-old Catholic college freshman, Charlotte (Alyssa Milano from Who’s the Boss? Fame), is seduced by a handsome vampire lover, played surprisingly by Spandau Ballet’s Martin Kemp. The vampire believes she is the resurrection of his lost love and if the young girl can remain pure for three days, the vampire will feats upon her and they will live eternally together, or else he’ll fall into an internal eternal sleep (because … plot!).

Whilst many of the films here used nudity as a tool to shock, here in Embrace of the vampire remake, the films over-reliance on female nudity/sexuality is clearly aimed at titillating rather than making statements. And whilst we like to be titillated, there’s something cheap and nasty about a film that plays it without it’s tongue firmly in its cheek. Embrace is a thrill ride of nudity and light gore, but has little impact outside of it’s cheap thrills and pert breast.

Hammer Horror and Ingrid Pitt are the perfect paring for this period piece horror drama. Pitt stars as Countess Elisabeth Nádasdy, a blatant rip-of of Countess Elizabeth Bethory, who loves nothing better than to bathe in the blood of virgins too keep her youthful looks. Clearly Olay have missed out on the AB-positive market. It never really delves deep enough into the terrible real-life deeds of Countess Bethory, but it’s still a very powerful film.

Countess Dracula is filled with buxom bosoms straining at tight tops and well placed cameras to catch them in all their wobbly goodness, but it also features ample boobage and a very un-Hammer scene where Pitt is shown fully nude and covered in blood. It’s an iconic moment for the film studio and one of the reasons why this film is on the list.

Mary, Mary, Bloody Mary is a crazy little 70s sexploitation film that is as thin on story as it is on budget. A sultry artist (Cristina Ferrare) drives around Mexico in a big white van, moonlighting as a vampire. That’s about it!

The film does however redeem itself, by flopping limply into the lesbian vampire subgenre, and turning all those frowns upside down. Yep, there’s plenty of nudity here to keep you going through out, alongside some light lesbian love making. It’s not nearly as graphic as it should be, but it certainly will grab you in all the right place.  If you don’t mind being grabbed by a vicious blood thirsty vampire.

Whilst Roger Ebert accuses the film of being centered around “an exquisitely effective sex scene”, you only need to look towards the films title to realise that the film is more than just the sum of a single scene. The hunger of the title isn’t just a hunger for blood, but also for love and life, and all those moments that make us what we are.

This gritty, bloody and damn right disturbing film just so happens to have one of the best lesbian love scenes ever placed on celluloid. Even if it does look like a Cadburys flake advert. 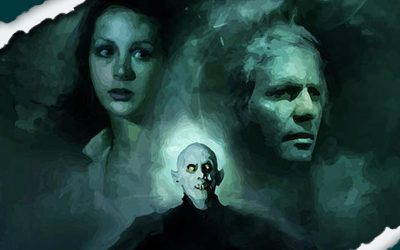 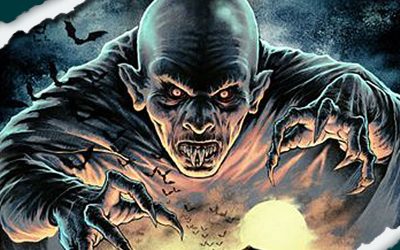 Gary Dauberman launches the trailer at this years CinemaCon 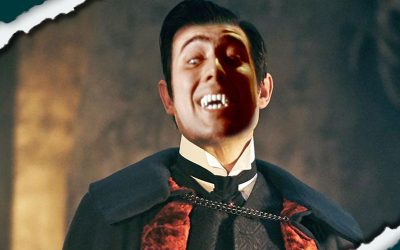 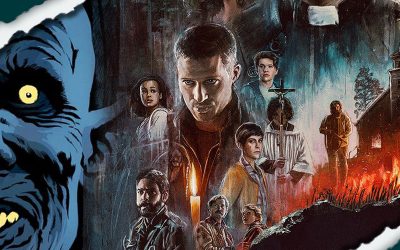 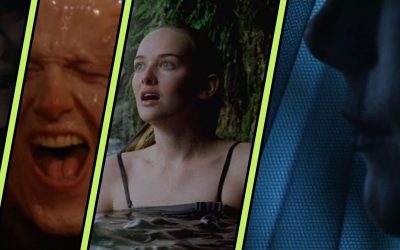 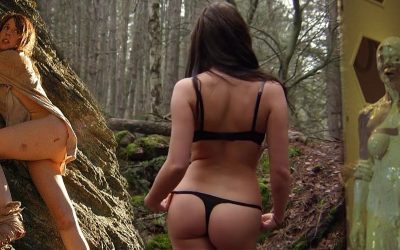 “Hello Horror Fans – Phew.. is it hot in here, or did I set fire to my cloak again? Did this list cover all the best nude VAMPIRE films, or did we miss a couple of BIG HITTERS? Let us know your thoughts in comments below.