When Grace Jones is writhing and gyrating half naked on screen, I’m trying my best to figure out if it’s sexy or humorous. One Thing is for sure, the 1986 vampire flick Vamp is very entertaining.
Vamp is the story of two pledges, played by Chris Makepeace and Robert Rusler, who need to find a stripper as part of their fraternity initiation. Hustling the rich kid to finance the whole thing, they head off into the evening with high hopes of finding the best stripper they can find. They randomly picked the After Dark Club unaware that it is actually a hive of stripper Vampires.

Now, this may sound like a rip-off of Tarantino/Rodriguez’s From Dusk Till Dawn, but Vamp actually predates it by ten years. Looking at the two films, you can’t help but noticed that Tarantino’s script borrows very heavily from Vamp. Don’t get me wrong, they are two very different films, but Vamp was the first and is a somewhat smaller affair.

Paying for a college Eductaion

Vamp is quintessentially a product of the 80’s.  From the hairstyles , clothes , cars and sets, it’s all very much stuck in a time period where mullets were cool and Sex was still sexy.  Lets not forget the films score,  which just screams 80’s , with a hint of Hammer horror.  So , yes , the film has dated somewhat, and some might find that a little jarring, but I’ve always had a soft spot for the 80’s, so i think it’s just FAB!  These were the years of my youth, and I grew up watching films such as Vamp, so re-watching years later, it’s like a little step back to a less complicated time. Yes perms were ugly and fashion just did not exists, but the 80’s did manage to make some pretty amazing horror films, and I would certainly include Vamp into this category.

Time to see the Dentist!

Heading into the After Dark Club, we are introduced to a whole host of Characters, including Katrina, Grace Jones in one of her best riles, the head vampire and stripper extraordinaire. Katrina is this is crazy, outrageous, mute who’s grunts and moans are her only contribution to the dialogue.  Despite her lack of voice, Katrina demands attention, with her snake like movements and wide crazy eyes, Jones plays her with such intensity that she’s all you can look at whilst on screen. I don’t think that her strip is very sexy , it’s like watching a drunk Aunt at a party , but nerveless it’still entertaining.

Whilst Grace Manages to over shadow the other cast members, their performances are good. The only sore point for me is the portrayal of Duncan, the rich Comedy relief, played by Gedde Watanabe, who’s overly silly and camp performance actually cheapens every scene with him in. However, one of my Favorite characters more than makes up for this lack luster performance. The trio encounter a gang, led by a albino called Snowball, played by awesome “bad guy” actor Billy Drago, who’s a cocky, crazed, hoodlum that’s about to bite off more than he can chew.

Been looking for you!

Vamp is well paced and beautiful film to watch. It benefits from the creative addition of neon lighting, which saturates most of the night scenes, in gloriously bright pinks and greens. It reminds me of the horror anthology “Creep Show” and the way that they lit their sets similarly. It makes the whole film feel like a comic book adding an extra depth to it. Whilst this type of light can draw your eyes away from the onscreen action, Vamp use it subtly to highlight and strengthen the scenes. It’s a real treat on the eyes and one of the stand out things I love about this movie.

Your ordered the stake?

Once the action gets going, we meet a wide range of different vampires, and it would seem that it’s not just localized to the strip club. Bus drivers, janitors and even small children have succumbed to the relentless thirst of Katrina and her girls. Katrinas Vampire transformation is one of the stand out scary moments of 80’s horror, going from sexy time to change your underwear in a matter of seconds. Shes mean, ugly and has a terrifying evil laugh. The other vamps are more mindless the most vampires you see in film, even Robert Rusler’s character AJ mentions that “they are a bunch of creeps, they don’t call them the walking dead for nothing!”. However certain vampires appear to keep their personality, so it’s a little hazy on how this works out.  They all look great though, all with unique features and creepy eyes.

Vamp is bold and beautiful. It’s unique in it’s approach and never really lays the whole vampire theme to thickly, whilst it does contain your usually vampire tropes, it’s never heavy handed or ever really makes it a key feature. Being set in a strip joint there is plenty of flesh on show , but it’s always subtle it’s never to risque. The entire film feels very well balanced and is always fun and enjoyable. I wouldn’t say that it was an extremely gory film , but it does have its moments , especially when Katrina features. And when the rouge stuff flows it’s always shocking and messy.

It’s certainly one of the better vampire films out there and well worth a watch.

You can read about Katrina and other Vampires here in our Before the Dawn – Vampire Countdown or Listen to it’s Original Song “Seduction Surrender” on Sinister Songs. 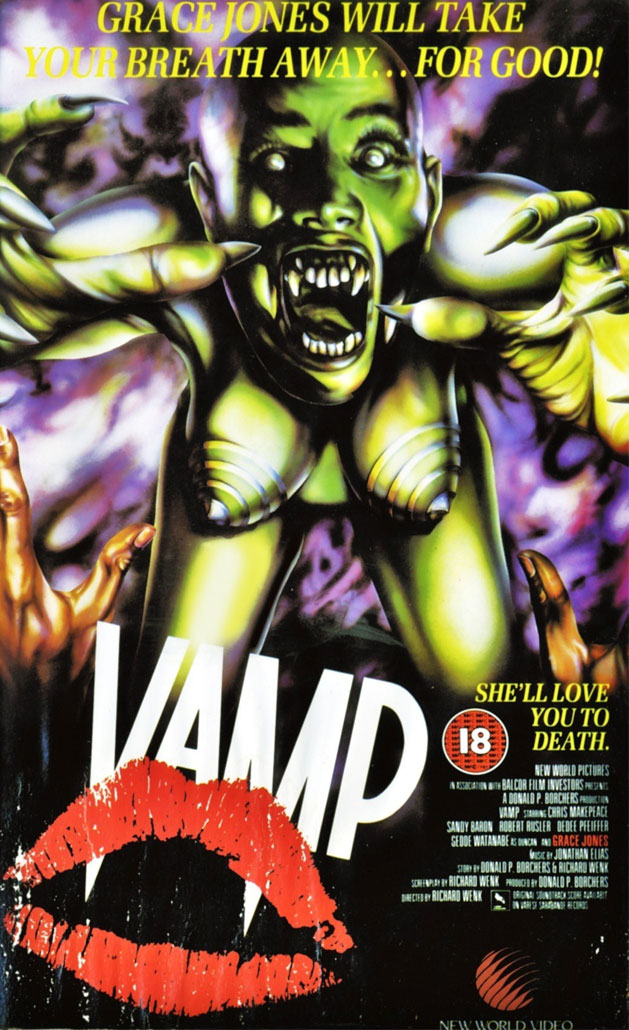 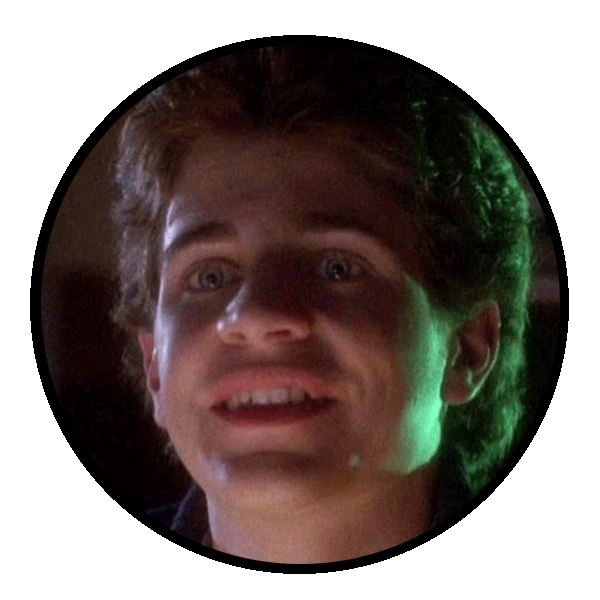 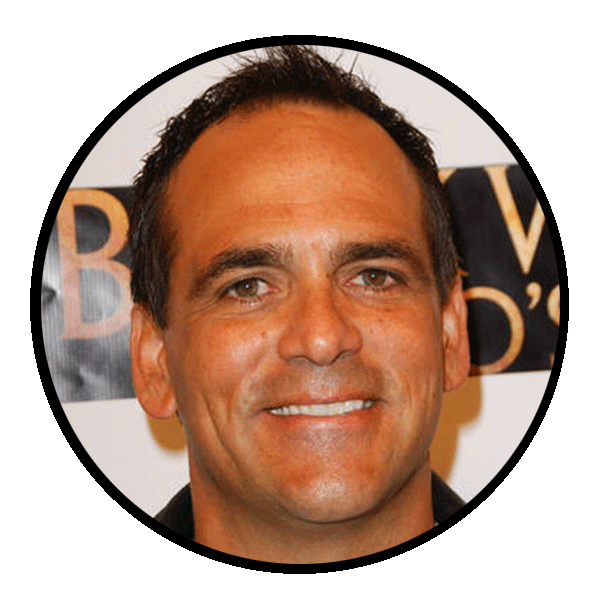 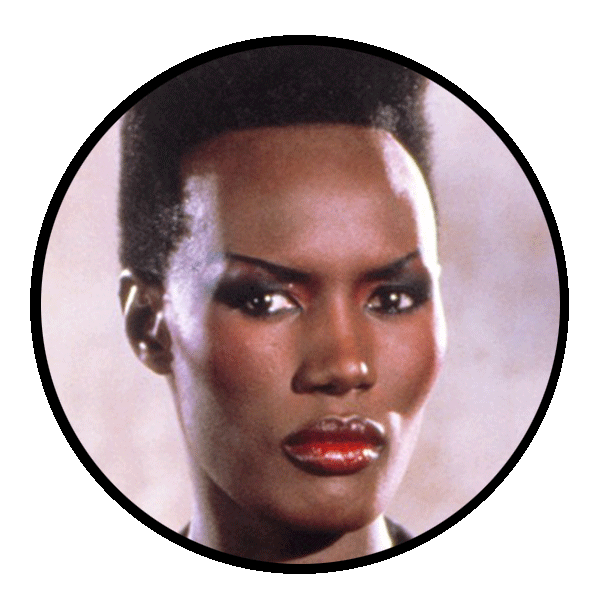